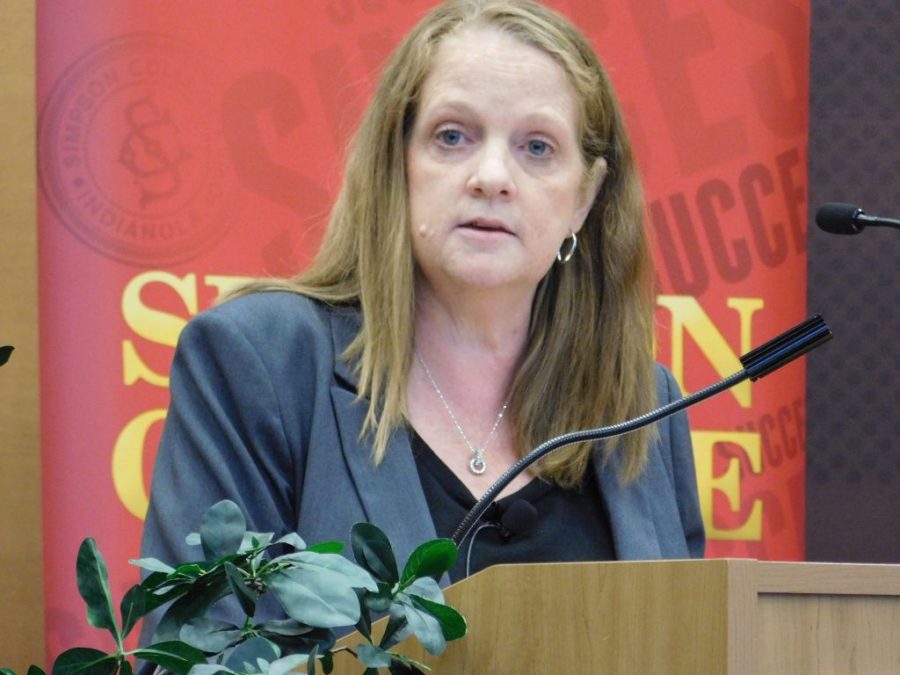 Terrell is well-known voice in the Iowa community, encouraging progressive dialogue by both religious and non-religious individuals in the areas of equality and justice, according to the Simpson website.

During her lecture, Terrell discussed many topics, including how sometimes religious freedoms are being used as an excuse to continue discrimination.

She read a quote from Kim Davis, the Kentucky clerk who refused to issue marriage licenses to same sex couples, in order to show both sides to the story:

“I never imagined a day like this would come, where I would be asked to violate a central teaching of scripture and of Jesus himself regarding marriage. To issue a marriage license, which conflicts with God’s definition of marriage with my name affixed to the certificate would violate my conscience,” Davis stated.

Terrell used parts of Davis’ quote to show people what has been happening and continues to happen in today’s society.

“Borrowing the words of Kim Davis, I never imagined a day when such an effort to mislead the public would be organized for the sole purpose to take away the rights of some citizens using religious freedom as justification for discrimination. Oh wait, we’ve heard that before,” Terrell said.

“We know our painful history; religious freedom as a tool to deny the rights of others is not new. Women’s economic rights, women’s employment rights, women’s education and voting rights, African American slavery, racism, and Jim Crow laws, interracial and inter-religious marriages, it’s all part of our history,” she said.

Senior Shaan Desai said he had a few key components he took away with him.

“I’ve taken away the notion that having a religion, or religious beliefs, that can control others is starting to be raised as a question,” Desai said. “People have been using their faith to assert dominance over others, subjugate others, over thousands of years and now we are starting to realize just because you have a faith does not mean you can do these terrible things.”

Terrell also discussed the concept of the chosen people and how civil rights are about the people as a whole, not one select group.

“A decision on civil rights is not about we the chosen people, in an individualistic, it’s-all-about-me manner,” she said. “We the people is about the country making decisions that take into consideration the health of a republic for all and ensure equal protection for every person, with particular care to protect the rights of minorities.”