Football aims for turnaround year after week one win 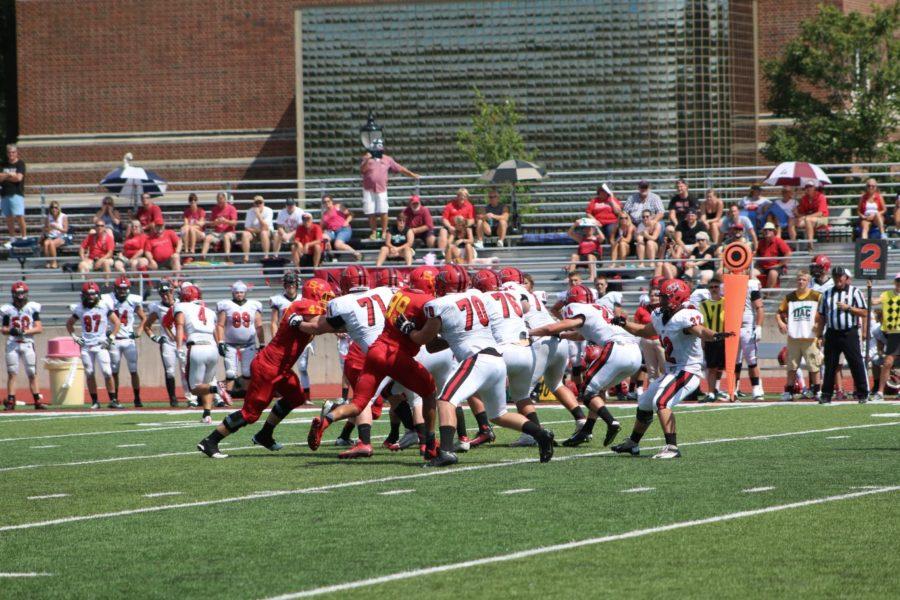 The Simpson football team was riding high after upsetting No. 21 Illinois Wesleyan University 13-3 on Sept. 20 last year. They were 3-0 with a bye week before kicking off the Iowa Intercollegiate Athletic Conference slate.

A few injuries and tight losses later and the Storm dropped seven straight games, finishing 3-7 and 0-7 in conference play.

“The upcoming season feels like a clean slate, but it’s in the back of everyone’s mind,” senior quarterback turned wide receiver Braedon Tovey said. “In our locker room on the whiteboard right when we walk in it says, ‘Remember that 3-7 feeling’.”

The football team hopes to do everything they can to avoid the feeling of 2014, turning last year’s negatives into this year’s positives. After week one, Simpson snapped its seven-game losing streak, showing more explosiveness on offense and the stingy defense that led Simpson to a 3-0 start last year.

Sophomore Davey Jergens generated 135 yards of total offense, two rushing touchdowns and one receiving touchdown as Simpson upended UW-River Falls Falcons 28-21 – Simpson’s fourth win in as many years against the Falcons. Hardly a marquee win, but a vital step for the team.

Saturday’s game was used as a tryout for quarterbacks Caleb Frye and Sammy Sasso, both sophomores who are vying for a starting job. Frye proved to be the go-to option down the stretch, going 9-for-15 with one interception and one rushing TD, while Sasso was just 1-for-4 with a 63-yard touchdown pass.

The Storm operated well under a revamped coaching staff that, along with head coach Jim Glogowski, had only one coach return to the same duties as the previous year. Despite this, only one face is new to the coaching staff.

“Although we have a lot of new coaches coaching the positions, the faces aren’t really all that new,” head coach Jim Glogowski said. “Judge is really the only new face.”

Judge will get to utilize an offensive line that returns five starters from last year and that averages a size of 290 pounds per person.

Simpson was throttled by injuries on all sides of the ball last year, although this year it’s a blessing in disguise. Preseason All-Americans Clay Finley and Nate Connealy both red-shirted last year after season-ending knee injuries. They’ll be back along with Mike Pavon at linebacker and Reid Ryan at defensive back – both of which were sidelined by injuries.

The injuries provided opportunities for experience for the team’s youth, which is now being converted to experience this year.

“Fortunately, the negative effects of last year are certainly the positives this year,” Glogowski said. “It’s fun as a coach to work with all of these pieces and have them back.”

Wide receiver Corbin Clark along with Finley at defensive end are both nursing injuries early on this season, but should be back after the team’s week two bye – which has come at an opportune time. The Storm may already be snake-bitten by injuries to starting center Corey Meyer and Pavon, suffered in week one, though.