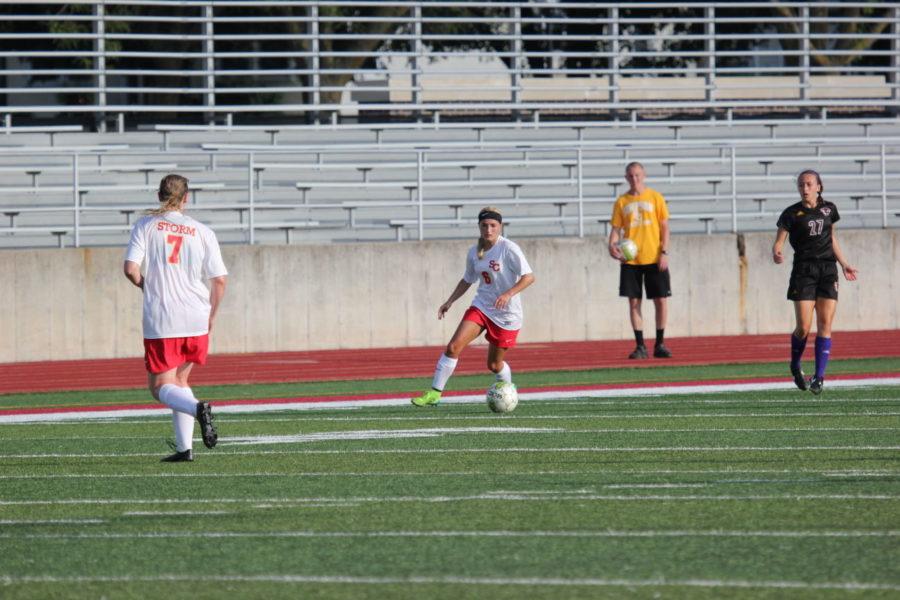 Simpson played 169 minutes of tied soccer in their first two games but went on to lose both of them in one-goal fashion.

On Wednesday at Buxton Stadium, the women’s soccer team got that extra push and more.

Simpson (1-2) got an assist and a goal from Meredith Harrison on its way to a 3-0 win over Clarke University (0-6) in Jill Serafino’s first win as head coach.

Both teams were looking for their first wins of 2015, and for the Storm, they were pursuing their first win in 12 games dating back to Sept. 21, 2014.

Senior Kate Morford helped Simpson break the drought and a 0-0 stalemate with a goal in the 21st minute coming of a loose ball in the box. It was Morford’s second goal of the year. Hannah Haack was credited with the assist.

Simpson played stingy defense and finally got some breathing room when Harrison set up Casey Reisen for a goal from 10 yards out, putting the Storm ahead 2-0.

Harrison wanted in on the scoring action as she sent a booming 25 yard ball into the back of the net, completing Simpson’s scoring as she notched her third point on the night.

The last time a Storm player recorded at least three points in a game was when Rachel Muse notched four in a 3-1 win over Westminster College (Mo.) on Sept. 16, 2013.

Freshman Zoe Seiler (1-1) played all 90 minutes in goal for the Storm, recording one save as the Simpson defense only allowed four Clarke shots to be taken.

The Storm are now 8-3 all-time against the Clarke Crusaders.

Simpson heads to America’s Dairyland on Sunday, Sept. 13 for its next matchup – a 3 p.m. kickoff against UW-Platteville.