Board of Trustee member presents new book to alma mater 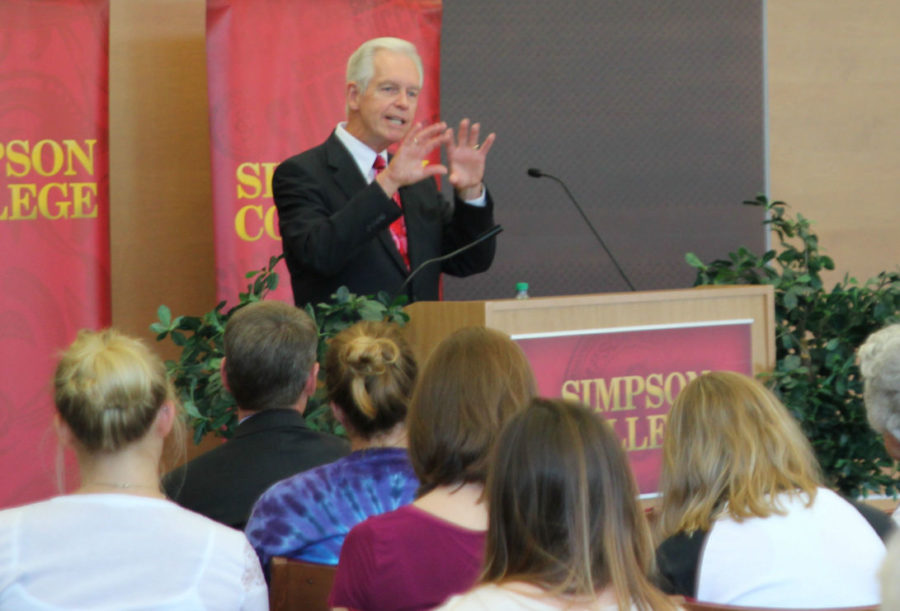 Speaking to a crowd of about 200 people, the 71-year-old from Innsbrook, Missouri, promoted his book, “Prepare for Leadership: From farm boy to Times Square,” while sharing personal anecdotes.

“Stretch yourself. Do something that makes you feel uncomfortable. You’ll be surprised at what you can do,” Ramsbottom said.

Ramsbottom was fired from his job at Purina Mills at age 55 but later was instrumental in founding Renewable Energy Group, Inc., in Ames, Iowa. Within a few years, the company he helped start surpassed his former employer in annual earnings.

The businessman, who graduated from Simpson in 1966, is considered a leader in the biodiesel industry — now worth $16.8 billion in economic impact.

During his speech, Ramsbottom explained biodiesel fuels are beneficial because one unit of energy is used and five are recreated, which improves energy efficiency. With petroleum, however, one unit is used, and one is created.

The book, Ramsbottom said, was intended as a memoir for his grandchildren, but after a group of young entrepreneurs from St. Louis read the rough draft, they insisted it be published.

In “Prepare for Leadership,” he explains how hard work and drive were necessary growing up on an Iowa farm and its transition into the business world.

“I encourage you to be prepared, be ready to go and take action because you might not have another opportunity. So, think and act,” Ramsbottom said.

Senior Alexander Cutchey, a marketing and philosophy major, said the lecture was more of a discussion among parties as opposed to a traditional 45-minute speech.

“I thought he had a couple good takeaway messages,” Cutchey said. “Simpson faculty asked questions that were directed toward a different audience other than themselves.”

Cutchey said the main message he received was to be persistent, as Ramsbottom traced back to his farming roots and his desire to have a horse.

Ramsbottom made the analogy of breaking a horse, which involves persistence and patience, in order to build trust.

Cutchey, however, said he noticed some inconsistencies in the message.

“There were some aspects that seemed a bit contradictory,” Cutchey said. “One such occurrence was when he was talking about going against the grain to be successful, but then while working for a corporation, don’t go against the grain. We need to be a collective member of the group.”

After giving his 30-minute speech, Ramsbottom opened up the floor for questions, and faculty and students responded thoroughly with questions about his story, the biodiesel industry and entrepreneurial advice.

The book’s message didn’t resonate with everyone, though.

“He got a new job getting paid one-third of what he did before,” Bogner said. “Then, he worked his butt off and helped jumpstart the biodiesel industry and now makes bank. It wasn’t bad, but his philosophy was to make a lot of money over doing what you enjoy, which is dumb.”

In an interview, Ramsbottom said writing the book was fun but also time consuming.

“I hope readers can benefit from my experiences and develop an organized thought process about how one deals with adversity and develop a plan going forward,” he said.

Ramsbottom concluded the lecture by saying the secret for success is not a secret at all: Work hard and be intentional.

A portion of the proceeds from Rambottom’s book go toward “God Cares Ministry,” a charitable organization dedicated to helping veterans find employment.