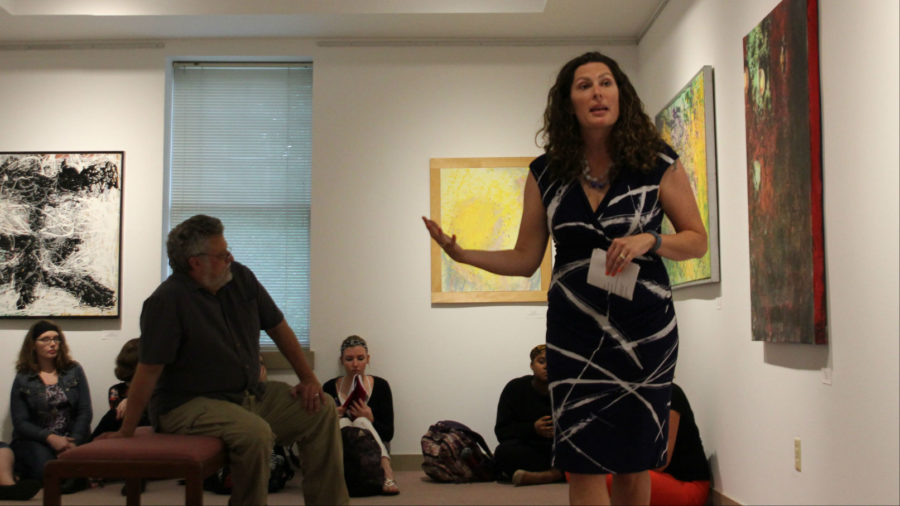 Anna Pagnucci, professor of art at Ashford University in Clinton, Iowa, was the first of five artists to show their work in the Farnham Galleries for the 2015-2016 academic year at Simpson College.

Pagnucci’s father is an immigrant from Italy, bringing with him the vibrancy and color of Italian culture. This, mixed with her rural, Midwestern upbringing is made apparent through her use of bright and dull colors in her artwork.

“Abstraction shifts and changes all the time,” Pagnucci said.

Normally, people think of portraits as being just like a photograph. In this case, Pagnucci created portraits of family members — both living and dead — based on old photographs and stories of the family members.

With this concept in mind, Pagnucci painted portraits not based on subjects’ physical appearance, but the characteristics that made them who they were as a person.

Pagnucci also recognizes and accepts that art can mean different things to different people. She doesn’t criticize audiences who don’t see her art as she saw it in her mind.

Often abstract work is difficult for viewers to relate to because figures aren’t instantly recognizable. To make money, Pagnucci worked on commission doing figurative work with objects the audience could recognize. After time, she moved back to her original abstract-expressionist style, but with a different perspective.

“People come to art, they start looking for recognizable things,” she said. “So I thought to myself, ‘Maybe I need to give my audience a little something that they can grab onto.’”

Pagnucci gave her audience tree-like forms which she’s been told look like arteries or brain synapses. This response has caused her to consider an important question: Should the viewer see what the artist wants them to see?

The next artist coming to the Farnham Galleries is Len Davis who works with a lot of mixed media to create his works. His reception will be held Oct. 5 at 5:00 p.m. in the galleries, and his work will be there until Oct. 30.