Can you get a second chance at life? One Simpson student did 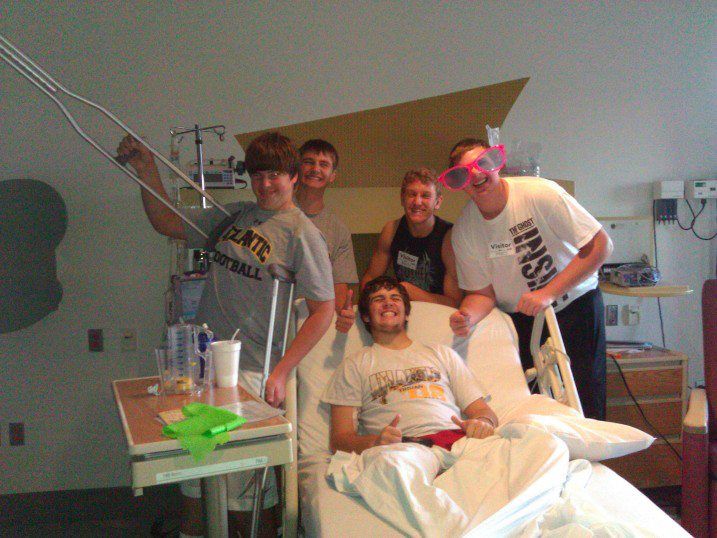 by Jordan Mauk, Special to The Simpsonian

Following a victorious Friday night football game during my junior year of high school, I began experiencing a peculiar pain in my hip.

Football is a very physical sport, so I figured it was the result of Friday’s game.

As the week went on, the pain gradually increased and other symptoms appeared, so I went to the doctor to try to figure out what was happening.

I remember being asked how intense the pain and I basically yelled, “10.”

It was by far the worst pain I have experienced. I was admitted to the hospital, where they performed many different tests and later determined that I had methicillin resistant staphylococcus aureus.

In most cases, MRSA comes through a skin infection. For me, it entered my body and attached to my right hip. After a few days the infection broke off in my bloodstream, and that’s when everything got serious.

My blood pressure would go from extremely high to extremely low, though mentally I wasn’t aware of what was happening. My speech was slurred and my organs started failing one by one. My lungs were filled 90 percent with the infection, so they had to put me on a respirator that was so hard on my body I couldn’t be conscious.

They put me in a medically-induced coma for 10 days. I don’t remember it, but I’ve been told I technically died at some point during the coma.

When I woke up from the coma I was still on life support. I was groggy for the next two days. I couldn’t speak because I had tubes in my throat so I could not communicate my discomforts, which was extremely frustrating.

Once the tubes were finally removed and I could move about a little more, I looked in a mirror and saw that I had a full beard for the first time in my life, which scared the crap out of me.

Despite everything I went through, the worst part was the following two weeks. I was unaware of all the little things that were happening the previous two weeks, like the fact that I was unable to go to the bathroom on my own. It was extremely humiliating to have someone help me do something I’ve done on my own since I was a toddler.

Being a lineman, I had worked hard to be as big and strong as I could be. But after not moving a single muscle for 10 days, I lost 30 pounds — almost all of it muscle. This was heartbreaking for me.

A majority of the final two weeks was preparing to leave the hospital. It was eye-opening to see how weak I became in just two weeks. I couldn’t sit up in bed on my own, walk on my own, or pick up anything more than a pound or two.

All I could do was sit and watch TV all day with breaks only to do physical therapy, which I dreaded. I felt so pathetic not being able to do daily activities most people don’t even think about.

All in all, after being cared for by an amazing team of doctors, nurses, and physical therapist, I left the hospital after one full month 100 percent healthy.

Have a funny, bizarre or inspiring story you want to share? Email [email protected] with your story to have it featured in The Simpsonian or thesimpsonian.com.