The tale of 2 quarterbacks 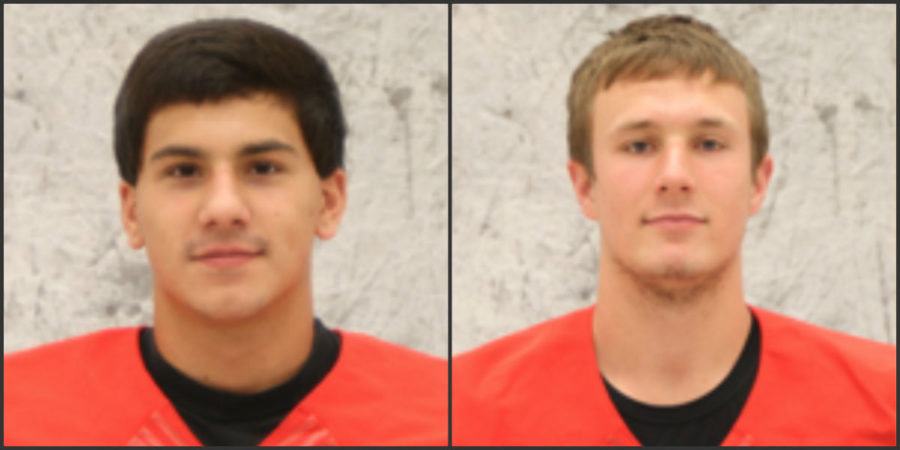 But two years into the graduation of 2013 Iowa Intercollegiate Athletic Conference player of the year Taylor Nelson, Simpson football has been through a series of quarterbacks.

In the past 12 games, five different players have taken snaps at quarterback.

The quarterback search has now landed between two players: Caleb Frye and Sammy Sasso – neither one of them are seniors, or even juniors.

Frye and Sasso come from different backgrounds and in different molds under center.

Frye is the small town Iowa boy from Ogden, Iowa, a town of just over 2,000 people, and best-known for being the location for the film “The Crazies.” He earned varsity time as a freshman and set the school ablaze after throwing for the passing yards record in a single season and for a career.

“Caleb came from Ogden, which isn’t quite as big of a school and had some success as a younger player,” head coach Jim Glogowski said.

Sasso, on the other hand, likely played in 80 to 90 degree heat for every high school game at Hamilton High School in Chandler, Arizona, a suburb of Phoenix.

It’s the Grand Canyon State’s largest school, has its own Wikipedia page and is the proud alma mater of Terrell Suggs. The differences speak for themselves.

Frye got in-person interaction during the recruiting process, whereas Sasso jumped into the situation through being contacted by previous offensive coordinator Joe Beschorner after he saw an online highlight reel of Sasso.

Sammy simply had to put himself out there and hope for the best.

“I guess I didn’t really know what to expect,” Sasso said. “I just kind of put myself out there.”

“Shotgun Sasso” earned second-team all-conference honors his senior year, which at first glance seems like it doesn’t hold a candle to Frye’s first-team all-state honors, but at a school over 3,600 plus students, it proves he’s no slouch either.

“I think Sam is a kid that came from a big high school program in Arizona so you certainly see some of those characteristics earned when going through a big successful program,” Glogowski said. “You can see some of that certainly carries over to his game.”

While the hometown and high school column is much different, the next four columns: year, position, height and weight are all identical. They’re both listed at 6 feet tall, 175 lbs. and actually live in neighboring suites in Buxton Hall.

Both players have only been able to give the coaches an appetizer in regards to what they can do, but so far, Frye has shown an ability to scramble and evade the rush, accumulating 93 yards on 30 rushes in his first six career games.

Rolling out on the quarterback bootleg in high school made Frye a fan of throwing on the move, whereas Sasso likes to read the defenses in the pocket.

“Sam probably has a better calmness about himself and an understanding of how things work in the rotation and depth chart,” Glogowski said.

Coaches have had a small sample size to evaluate Sasso through his first two career games. Sasso has gone three of 11 in the air for 79 yards, one touchdown and an interception.

While the differences do bear themselves on the field, Frye doesn’t like to pigeonhole.

“See, that’s what pigeonholing I don’t like,” Frye said. “That’s what I’d say. I like rolling out and throwing, but if the defense is going to give me 15 yards to run I’m going to do that.”

In the first week, a 28-21 win over UW-River Falls, Sasso and Frye were both given three series to start the game in which they’d try out for who would receive the remainder of the snaps going forward.

Frye ended up earning most of the playing time, going nine of 15 in the air while Sasso attempted just four passes, earning Frye a starting job in week two against Illinois Wesleyan.

The process in determining a consistent starter is still open, and isn’t decided yet. Glogowski has even expressed that they may not need to have one clear cut starter.

“You never know how the season is going to shake out, but they’re both going to have to prepare like they’re the starter,” Glogowski said. “They’ll both get an opportunity to play.”

Head-to-head competitions are always an interesting dynamic when they’re within a team, but Frye and Sasso insist that they’ll support each other through the duel.

“It’s a friendly competition,” Sasso said. “We are used to it because we have been competing with each other for about two years now.”

Senior Bryan Boesen was even thrown into the mix when he went three of five against Illinois Wesleyan in week two.

“I think I feel like I do have something to prove,” Frye said. “Just to prove that just because I’m young it doesn’t matter how old you are. It’s about playing, I guess.”

Simpson returns all five offensive linemen in 2015, helping to hear the leadership role with Frye and Sasso for the Storm. They’ll also be able to work with having an experienced backfield in junior running back Jordan Beem and seniors Julius Foster and Jared Grove.

A 49-7 loss certainly seems like a game that wouldn’t point the compass towards one quarterback or another, and the challenge will be equally steep with a matchup against College Conference of Illinois and Wisconsin, Elmhurst College, on Sept. 26.

For now, the quarterback-by-committee philosophy will likely still be on tap.

“Ironically, I don’t feel pressure to pick a guy because they’re both good players,” Glogowski said. “No matter who is out there, I think we can win the game. I’m just going to let it play out. I don’t feel the need to make a decision for the sake of making a decision.”