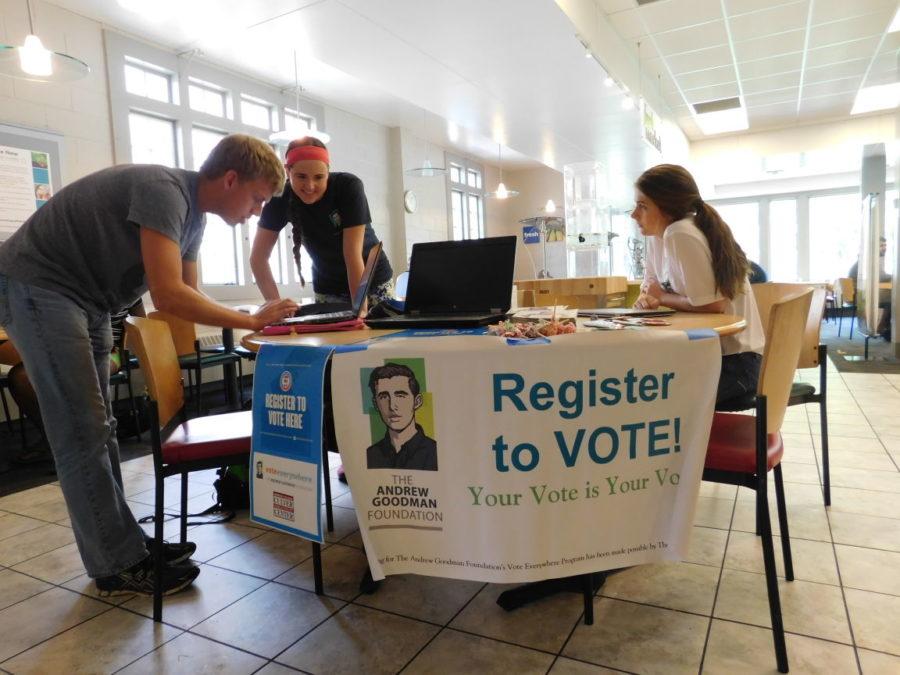 Last week, the Culver Center and student ambassadors for the Andrew Goodman Foundation participated in National Voter’s Registration day. They were stationed in several different areas on campus, including Dirlam Lounge, Kent Campus Center and Pfeiffer Dining Hall from 8 a.m. to 8 p.m.

By early evening, roughly 70 people had registered to vote at their setup in Kent alone.

Jacob Bruns, Bobbi Fogle and Tegan Jarchow are among the students chosen by the Culver Center to be Culver Fellows. They were some of the individuals in charge of encouraging students to vote last Tuesday.

Lack of voting and limited interaction with politics from college students and young people has been a problem in recent years.

The Center for Information and Research on Civic Learning Engagement conducted surveys and found that only 21.5 percent of individuals aged 18 to 29 voted in the 2014 midterm election.

One senior said, “If it’s just one person, it’s not going to make a difference.”

At the Culver Center setup in Pfeiffer Dining Hall, Simpson freshman Jacob Bruns said, “I feel that the younger generation is kind of disenfranchised. They see all the conflict that’s happening in politics currently and they just don’t want to get involved with it.”

Bruns also said, “I think that civil engagement is a responsibility of everyone that lives in the United States. The campaigning and the advertising is what’s turning them away from it.”

Freshman Bobbi Fogle said the younger generation also doesn’t want to get involved for controversial reasons because they “don’t want to make an enemy out of themselves” and that it has “nothing to do with them.”

Young voters often think their opinion doesn’t matter. Junior Tegan Jarchow said that if the younger generation doesn’t vote, it’s more likely that issues relating to students will continue to be ignored or brushed aside, such as student loans and other education issues.

There are numerous ways students can become informed citizens.

“If you don’t vote, you can’t complain about what’s going on,” Fogle said. “People care less and less, which is very concerning. People just have the wrong idea of what voting can do.”

Jarchow suggested trying to keep up with the news, especially from unbiased news sources, which can sometimes be difficult.

“Get informed,” Bruns said. “You don’t have to get involved, but as long as you understand what the issues are – if you take the effort to look up the candidates – just vote.”

The presidential election is on Nov. 8, 2016, and the Iowa Caucuses are in February.