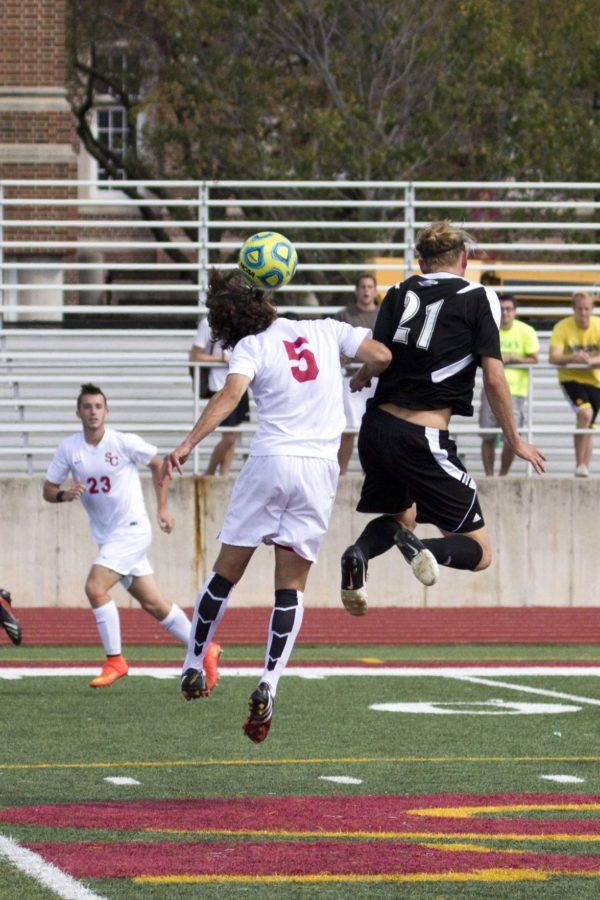 INDIANOLA, Iowa – Elmhurst freshman Josh Arvidson came into Monday’s game with one goal on the season but left with four as the Bluejays handed Simpson a heartbreaking 3-2 defeat in overtime at Buxton Stadium.

Arivdson headed in the decisive goal on a cross from Keegan Thompson just under five minutes into the overtime period, completing the hat trick and giving Elmhurst its third straight victory.

The freshman plagued the Storm (4-7-1) with goals in the 35th and 61st minute to bring Elmhurst (4-6-1) back from a 1-0 deficit created by Cody Jacobson’s acrobatic, high-arching goal in the 21st minute.

A red card on Alec Gnass in the 81st minute pushed Elmhurst to play with 10 men the rest of the way though, giving Simpson a window in which they would capitalize on.

Freshman Darius Doswell, who had left the game to tape up what appeared to be an injured wrist, put away a corner kick from Tyler Neumann to knot the game up 2-2 in the 82nd minute.

Doswell nearly put Simpson in front only minutes later in regulation, just missing left of the mark on a shot.

Instead, Simpson dropped their fourth straight match and their second overtime loss during that stretch.

As the theme has been all season, Simpson outshot its opponent, this time dominating in that category 19-11 while generating 13 corner kicks to only five for Elmhurst.

While the Storm scuffle, senior Tyler Neumann has reestablished his presence in the Storm offense, recording his fifth point in four games while also tying the career-assists mark at Simpson with 21 helpers.

The road doesn’t get any more friendly for Simpson as they take on another College Conference of Illinois Wisconsin foe in Augustana (Ill.) on Wednesday. Following that will be Luther on Saturday, Oct. 10 in Indianola.