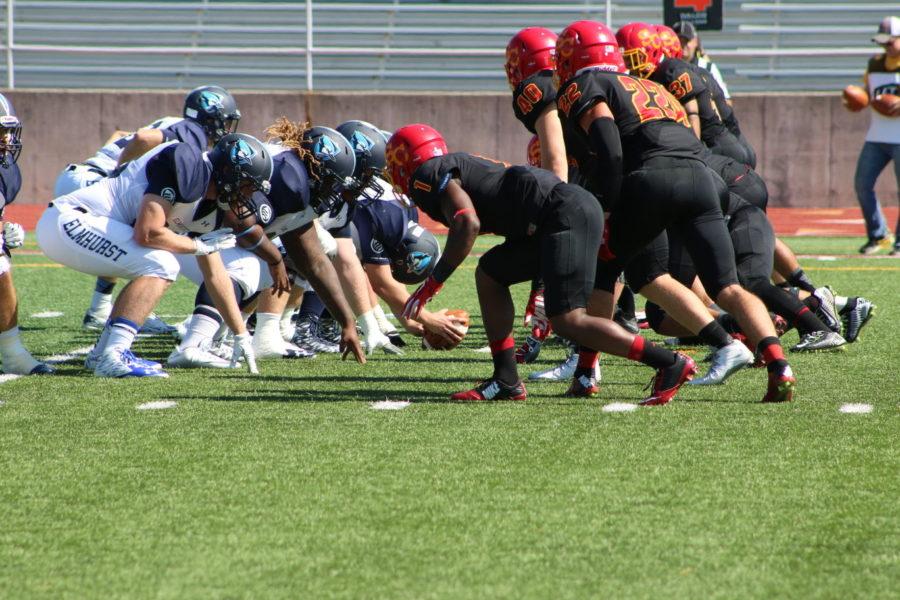 Simpson’s 1-2 record may as well go out the window this Saturday as the Storm kickoff the Iowa Conference gauntlet against Buena Vista at Bill Buxton Stadium.

After dropping back-to-back games to a formidable Illinois Wesleyan and Elmhurst team, an at-large bid is all but gone. Postseason play depends on the next seven games.

“The bottom line is, that when you get into league play everything changes,” head coach Jim Glogowksi said. “You know the teams better, you know the schemes and we are just trying to prepare for the seven-week ride we all call the conference season.”

Despite coming at 1-2 on the season, and selected to finish second to last in the Iowa Conference, Buena Vista always seems to bring its best against the Storm.

The Storm lost by two points to the Beavers in 2012 and ’13 and then last year, Simpson coughed up a 21-7 lead on its way to a 38-31 loss, sending Simpson into a tailspin that had the Storm losing seven straight.

“We walked into Storm Lake [last year] 3-0 and feeling good about ourselves and then we walked out 3-1 and it felt like the world was going to end,” Glogowski said.

Again, Simpson opens conference play with Buena Vista. And this time, the game could have the opposite effect it had in 2014, and help get Simpson on the right track after being outscored 80-19 over the last two games.

“If you were to tell me that we would be 2-2 and our first conference win would be against Buena Vista, it would be hard to trade that to being 3-1 like we were last year,” Glogowski said. “So, we have a chance to get off to a great start.”

Despite scoring only 11.3 points per game and allowing 38.3 on the other side, Simpson will have to have their eyes locked on a few players.

As Simpson was for the first two weeks of the season, Buena Vista’s offense is led by two junior quarterbacks – Trevor Trunck and Tory Beger. But in terms of experience, they’re both freshman, trying to fill the shoes of four-year letterwinner Bobby Brown.

Regardless of who is throwing, senior wide receiver Jalen Henningsen has been the favorite target, reeling in 16 balls for 237 yards, a year after being sidelined by an ACL tear.

Beger and Trunck both like to pass and have combined for -41 yards on the ground. They leave the rushing duties to running back Cody Mowery, who has gained 375 yards on 70 carries.

Defensively, Buena Vista has been torched for 439.7 yards per game but they’re strong up the middle. Sophomore linebacker Brady Illg has 31 tackles while linebacker Zach Muggenberg has 21. Defensive end Quamree Harris made a goal-line stop to help Buena Vista beat Waldorf 14-10 last week. So far he leads the team with 2.5 sacks and three tackles for loss.

It’ll be a matter of keeping them healthy as last year’s matchup with the Beavers sent Simpson home with a myriad of injuries in a turning point in 2014.

“It’s always been back and forth so I expect much of the same this year,” Glogowski said. “It could be a very competitive back and forth game and we need to make sure to eliminate mistakes and take care of business.”