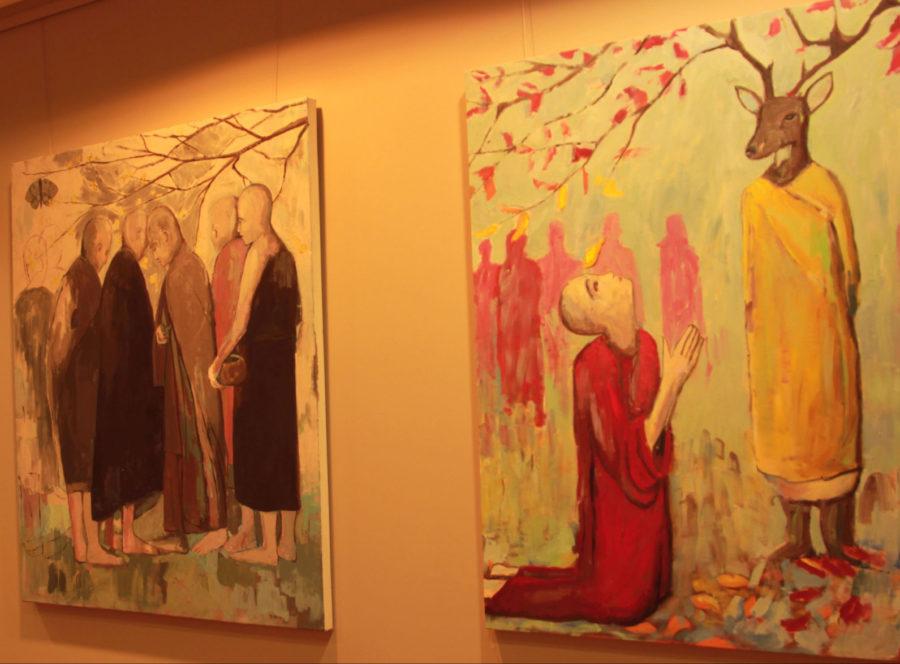 Throughout the school year, Simpson College showcases a wide range of artists in its main galleries, Farnham Galleries, in Mary Berry Hall and Willis Gallery in Kent Campus Center, running through Oct. 22.

The Willis Gallery will be home to professor of art Justin Nostrala’s exhibit called “Monks and the Blue Deer.”

Nostrala explained in a statement the 11 pieces for “Monks and the Blue Deer” came after he worked on another collection of drawings of prayer and meditation where he looked into belief systems, such as Christianity, Hinduism, Buddhism and Islam.

“Since I was primarily interested in Buddhism at this time, the work filtered toward that practice. I especially became interested in representing the day-to-day presence of Buddhist monks,” Nostrala said.

Nostrala said he believes his interest in Buddhism goes back to the late 1990s when he was doing an internship in New York. He was listening to a talk show on the radio and heard a Zen Buddhist describe some of the philosophies of Buddhism.

Another main focal point in both Nostrala’s artistic statement and his pieces is the moth that appears in several of his pieces, which was appropriated from the work of artist Kiki Smith.

He wanted to have the same energy in his pieces that Smith had in hers.

Nostrala said as an artist, he isn’t sure what to do next but insists that if he doesn’t do something he wouldn’t be an artist anymore.

He believes looking at or trying to imitate another artist is something that keeps him going as an artist.

“Doing something is better than doing nothing,” Nostrala said.

Nostrala said having the pieces in Farnham instead of having them pinned around his studio made him realize that the pieces all had connections.

He had one similar stream of thought while creating these pieces.

“I was surprised to find cohesiveness about the work,” he said.

When one enters the gallery Nostrala said the images go, for the most part, in the order in which they were created.

Starting from the brains in boxes drawings, which were the earliest pieces, throwing off the order just slightly is the gouache paintings, which were created last, and then back in order with the Buddhist monks images and the blue deer painting.