Beem breaks out again, but miscues trip up Storm on homecoming 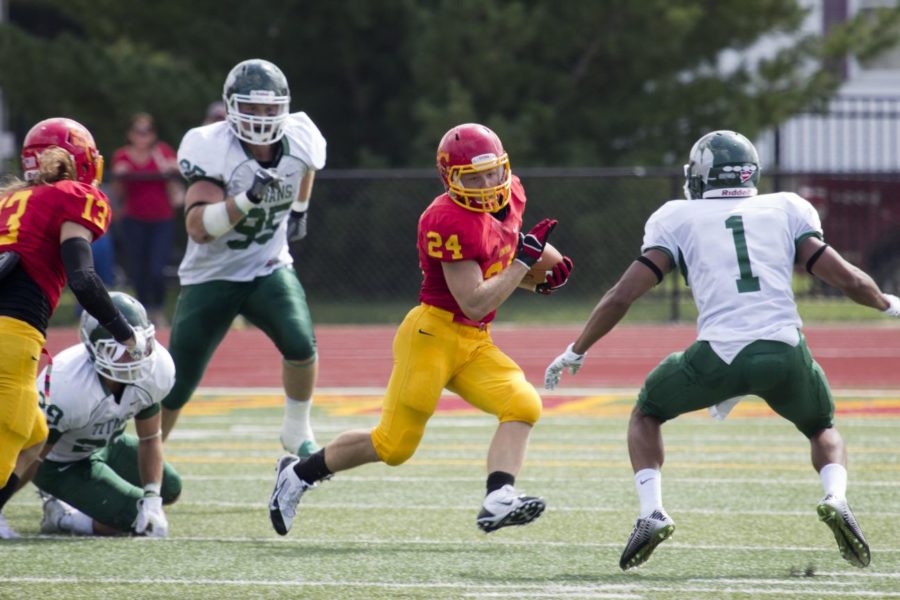 INDIANOLA, Iowa – Simpson tied it 24-24 on a Drew Jensen field goal with 2:40 remaining in the game, but Dubuque’s Maurece Herrion topped a 75-yard drive with a game-winning five-yard touchdown run with 44 seconds remaining as the Spartans weathered the Storm, 31-24 on Saturday.

The Storm (2-3, 1-1) put together a threat on their final possession, but sophomore quarterback Caleb Frye had a pass picked off by Cody Binicewicz at the Spartan 13-yard line as Dubuque (3-2, 2-0) sealed up the win.

Simpson led for much of the way, taking a 7-0 lead after Jordan Beem’s four-yard touchdown run around midway through the second quarter. Dubuque added a field goal to cut the lead to 7-3 at the half.

From there the two teams traded leads three times, with Simpson being kept afloat from another break out day by Jordan Beem. Beem, reigning IIAC Offensive Player of the Week, turned a 77-yard touchdown reception and a 13-yard touchdown run to fuel the Storm’s scoring.

Penalties and turnovers led to Simpson’s downturn and kept Dubuque in the game. The Storm came into Saturday with only 13 penalties on the season, fewest in the nation, but committed seven against Dubuque.

Another key second half turnover came with Simpson trailing 24-21, driving into Dubuque territory. After runs of three, seven and six yards, freshman Cole Martin coughed up a fumble on the Spartan 25 with 12:37 remaining.

While Simpson forced a punt on the ensuing Spartan possession, the turnover stunted a potential scoring opportunity.

Ex-East Carolina University quarterback Rio Johnson torched Simpson’s secondary, throwing for 345 yards on 17 of 31 in the air, showing patience in the pocket.

While throwing a crucial interception late in the game, Frye’s performance Saturday showed continued growth. The sophomore was 20 of 30 for 275 yards and one touchdown. He also ran for 87 yards on 15 carries, stepping up and scrambling when needed.

Defensively, Jake Stearns and Clay Finley both had sacks as Adrean Johnson led the way with nine tackles and one pass breakup.