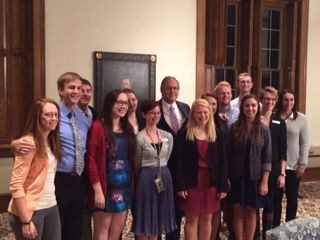 Last year, Iowa congressman David Young didn’t have as much of a chance to share his own policies, being overshadowed by the debate between Sen. Joni Ernst and Bruce Braley.

This time, Young’s trip to Simpson College on Tuesday, Oct. 13 gave Young the chance to speak his mind. Young spoke in front of a group of students in the Matthew Simpson Room and then to the Simpson College Young Republicans.

Speaking at @SimpsonCollege to Culver Fellows about my job as #Congressman, issues in Washington & taking Qs. #ia03 pic.twitter.com/lDsTED4EmW

“David is a first-term congressman, and he’s been here only once before,” senior political science major and Young Republicans president Austin Jacobs said. “I figured bringing him back to campus would mean a good speaker for the Simpson College Young Republicans.”

Young opened up with an introduction on his policy and touched on his legislative agenda, spending some time to talk about his appropriations for the upcoming fiscal year as a member of the Committee on Appropriations.

I really admire @RepDavidYoung’s commitment to compromise. It was great to see him at #SimpsonCollege today!

The previous chief of staff to Chuck Grassley touched on the highway bill, the Transpacific Partnership, the “irony” of the Iran Agreement, the heavy traffic of politics in Iowa, Syria, social security and student loans.

Money and the roughly $17 trillion debt weighing down the United States is of central concern in the congressman’s policy and its one of the reasons Young joined the Appropriations, a committee that works directly with how and what the federal government’s money is spent on.

“I got on the committee because I wanted to be on the frontlines and determine where the federal dollars are spent,” Young said.

In order to attack this staggering national debt, growth, rather than simply cutting expenses is the better plan of attack according to Young.

As a Van Meter, Iowa, native who attended Buena Vista University and Drake University, Young mentioned his commitment to Iowa in this respect as well.

“I want to make sure that the federal government’s money isn’t just going to urban projects, and that places in the heartland aren’t being dismissed,” Young said. “New York is not like Iowa, which is not like California. One size fits all approach isn’t the right thing to do.”

Young’s willingness to go beyond black and white in policy to working across state lines also translates to work between parties. For Jacobs, a Republican, it’s Young’s openness that he believes will benefit discussions in Congress.

“I really like that David is a moderate, and that he willing to reach across the aisle and do some things with the other side and the Democrats, which is something that I really think we need in Congress,” Jacobs said.

Naturally, in a room of college students, the talk of the future of social security, college debt and federal loans came to the forefront.

News of the Perkins Loan, a need-based student loan, folding had been circulating around, causing obvious concern for students. While media outlets across the nation are publishing this, Young assured that student loans and the Higher Education Act would be reauthorized.

“There is the higher education act, and we are reauthorizing that act,” Young said. “In the end we are going to make sure we have that accessibility for students, whether it’s Perkins or Stafford or Pell Grants. We go through this [concern] every year. I wish we didn’t.”

Young will have had been in office for one year on Jan. 3, 2016, and he continue to looks to work for this stability coming from the government.

“When there is certainty in any aspect of the government, it’s always good for America and good for the economy, and good for our people,” Young said. “ Democrats have ideas, I have ideas. I hope they come into play at some point.”