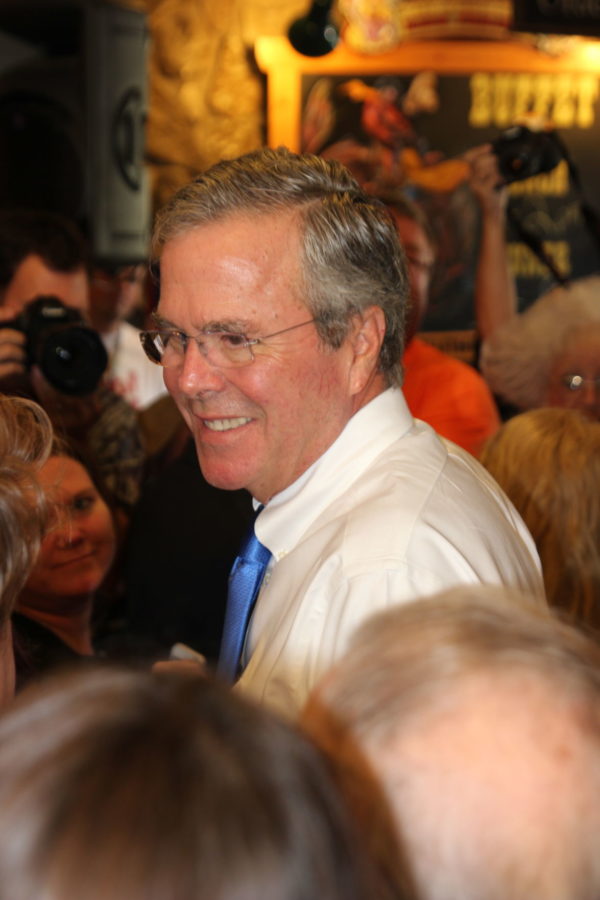 With standing room only, local residents, students and members of the media crowded into the restaurant for an hour long event including the regular stump speech, an open question forum and “time for selfies” with the republican presidential candidate. He even made a call on behalf of senior Austin Jacobs to wish his grandpa a happy birthday.

Among the Simpson students in attendance was freshman Pierce Carey. A student from Kansas, Carey is a freshman representative on Student Government Association and member of Sigma Alpha Epsilon on campus.

His question to the former governor revolved around affirmative action during Bush’s tenure in Florida. “You became one of the first governors to take race and ethnicity out of college admissions decisions. After this, in Florida, African American acceptance rates dropped by over 10 percent. As president, would you continue to support policies such as this?”

Bush’s response to Carey began with, “That’s not accurate.” He then segued into asking Carey about his shirt – which bore SAE letters – and then got to answering the question.

He continued to explain, during his time as the governor of Florida, he issued an executive order to remove affirmative action emphasis from college admissions decisions.

While Florida was not the first to forgo affirmative action, seven other states had previously done so through referendum, not an executive order.

“We had an admissions policy that lowered standards for one group at the expense of the other,” Bush said. “I didn’t think that was correct. I didn’t think it was the proper way of doing things, and through the use of executive order we replaced that system with a system that was fair to all.”

“The net effect was we had an increase, not a 10 percent decrease, in African American students during my time as governor; and an increase when it relates to Hispanics. It wasn’t based on discriminatory policies. It worked.”

Carey reflected on his interaction with Bush following this answer and voiced his concerns as a voter in the coming 2016 election.

“Jeb’s response was extremely political,” Carey said. “He spoke like a true politician and stood by what he said even though it was a failed policy decision. I expected as much coming from him.”

But the point of Carey’s question still lingers. While Bush made the valid point that overall minority enrollment increased in Florida following the abolishment of affirmative action, African American enrollment did in fact decrease drastically at the state’s two largest universities.

The University of Florida in Gainesville and Florida State University in Tallahassee saw anywhere from a three to 15 percent decrease.

Brandon Bowden, assistant vice president for student affairs at Florida State said, “If we don’t address this in the next two or three years, I think we’re going to have a problem. There will be so few black students on our campus that prospective students [who are black] will choose not to come here because they see no one who looks like them.”

While the technicalities of the question allow for gray area, the interaction was enough to influence Carey’s election decision.

“For me, this really questioned Jeb’s leadership,” he said. “I want to support leaders who make the right decisions, or own up to their mistakes and progress forward from them with new ideas. In this case Jeb did neither, and that’s one of the many reasons I am not supporting him in this presidential race.”