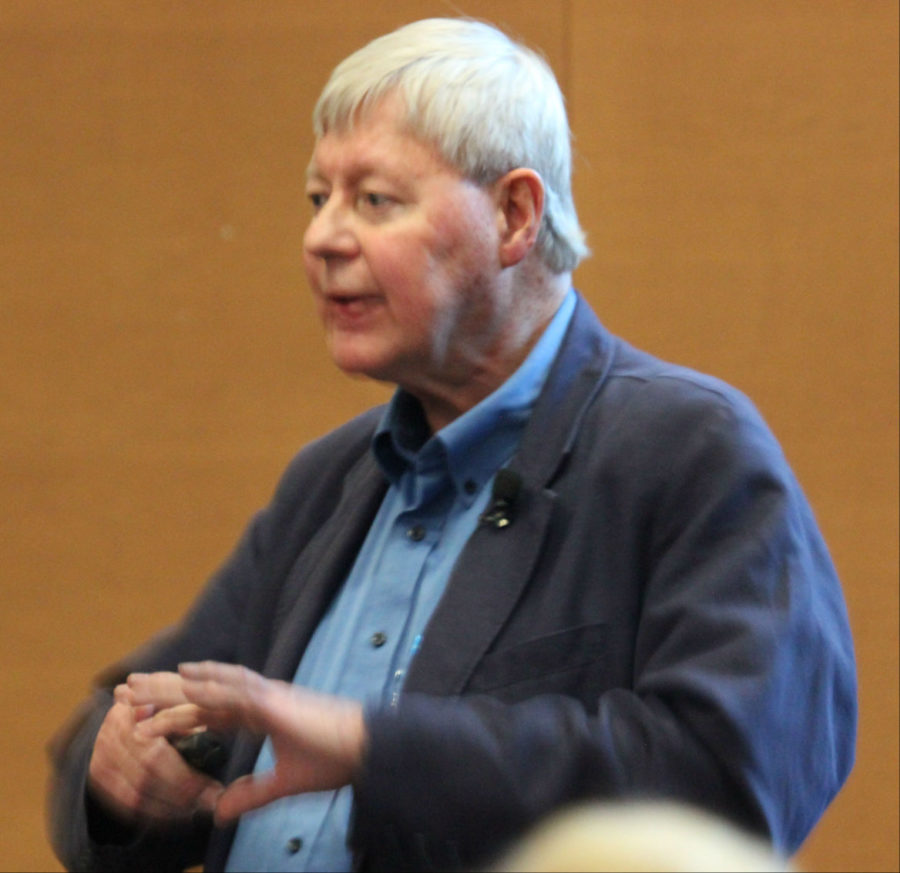 by Ethan Zierke, Special to The Simpsonian

Breeding graduated with an undergraduate degree in physics before going on to obtain a Ph.D. in geophysics at Columbia University. Since then, Breeding has worked as a research physicist at several U.S. Navy laboratories.

He was also an associate professor at both Florida State University in Tallahassee and the Florida Institute of Technology in Melbourne, where he taught advanced courses in geophysics, physical oceanography and applied mathematics.

Breeding began his lecture by defining the differences between weather and climate.

“Although they are related, it’s extremely important to know the difference between weather and climate,” Breeding said. “Weather describes conditions at a specific time and location whereas climate is an average of weather over time. It’s going to go up and down, but what we need to be concerned with is the overall trend.”

Breeding went on to describe how researchers use global average surface temperature in order to collect usable data regarding global climate change. Data is based on measurements that are taken at the earth’s surface, where it is easy to collect.

“A small difference in the global average surface temperature can cause a big change in the climate, especially in the polar regions,” Breeding said. “In the last 60 years, the average temperature in Alaska has risen twice as fast as in the continental U.S. This is a big deal because now the Alaskan mountain glacier amounts to one-third of the world’s loss of ice sheets.”

Breeding emphasized the devastating effects of a warming climate in these polar regions.

“We have observed that sea level has risen approximately eight inches since 1870, but the most drastic change has occurred in the last 30 years,” Breeding said. “Animals have a very limited range of environmental conditions in which they can survive. They follow temperature. Birds and insects move to higher elevations to achieve conditions they used to live at, but what happens when they run out of space to move?”

Breeding stressed the importance of recently developed methods in science to assist researchers in discovering why there has been such dramatic change in the global climate over the past half-century. These technologies also determine what important differences exist between the climate now and the conditions from thousands of years ago.

Senior Zach McEntee attended the event and said Breeding’s research was a wake-up call for his generation.

“I think what surprised me the most was the crash course he had us set on for 2040,” McEntee said. “At the current rate that we’re using resources and consuming toxic fuels, we’re guaranteed to have no ice caps in 2040. I can’t believe how quickly the trends pertaining to climate change have accelerated since the industrial revolution.”

Breeding closed his lecture by suggesting certain action be taken to reverse the recent trend towards a warmer climate.

“Nobody knew in the 1800s that burning fossils fuels would be a problem,” Breeding said.

“Within the last decade we were finally able to say for sure that human contribution to greenhouse gases is the No. 1 cause of climate change, and it’s time to do something about it.”