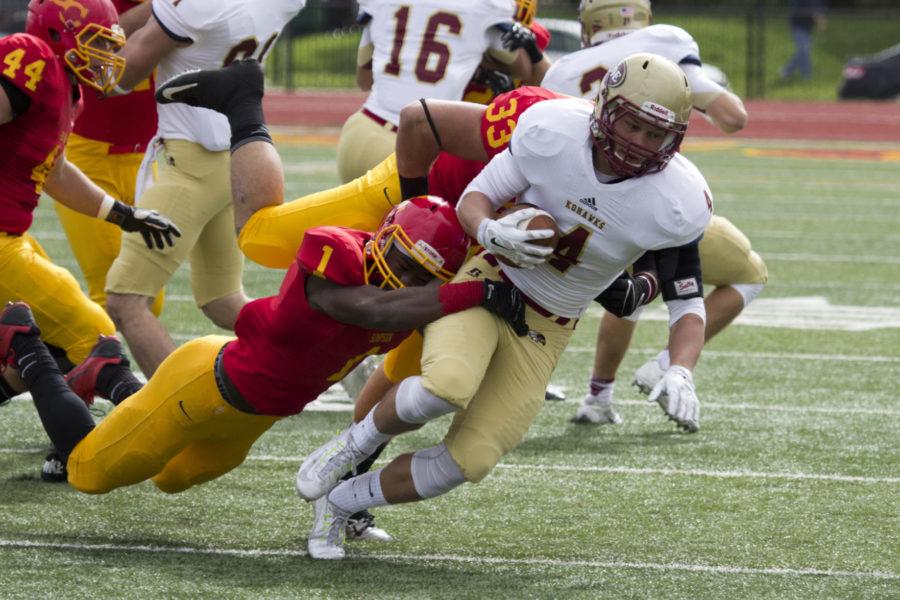 Simpson and Coe suffered their first loss in Iowa Conference play this season. With an undefeated No. 8 Wartburg team looming at the top of the conference, each IIAC game the rest of the way will be a precious game.

Standing at 2-3, 1-1 apiece, both teams have faced formidable opponents thus far, with Coe losing all three of its games to ranked teams in UW-Platteville, Wheaton (Ill.) and Wartburg. For Simpson, it was No. 17 Illinois Wesleyan that got in the way in a week three 49-7 loss.

All that will be pushed to the wayside when the Storm and Kohawks clash to stay on the upper half of the conference on Saturday.

“It’s a big game,” head coach Jim Glogowski said. “We are both 1-1 in conference and everybody wants to be 2-1 at the end of the day and keep pace.”

Coe looks to bounce back after losing 31-14 to Wartburg last weekend, committing three costly turnovers in the loss to the Knights. The Kohawks’ passing-laden attack produced 300 yards, but they could only generate 34 on the ground.

Saturday’s offensive performance is indicative of how Coe will likely fair with Simpson. They’ll spread the field and rely on 6-foot-6 inch quarterback Josh Rekers, who leads the conference in passing yards per game with 326.0. He has thrown for 10 touchdowns while throwing six picks.

“The quarterback is a big kid,” Glogowski said. “They’re a little bit different offensively from Dubuque, whereas they’ll release everybody on the field and try to spread you out and take advantage of matchups.”

Receiver Trevor Heitland will be a threat in the passing game, having the third most receptions in the conference with 36. Demetrius Harper leads the team with four touchdown receptions.

“I’m sure that Coe is looking at us and thinking of some things they can take advantage of,” Glogowski said.

When Coe does pass they rely on halfback Sam Lahr, who has scampered for 450 yards and three touchdowns.

Kicker Brandon Abbas leads the league in points and has connected on seven of eight field goals and 15 of 16 PATs.

Simpson will look to expose Coe’s defense, which has allowed 424.8 yards per game this year.

“Coe presents some different challenges,” Glogowski said. “Defensively they’re similar to us. They’ll be more like us size wise across the ball.”

Jordan Beem will hope to keep rolling after scoring six touchdowns and generating 465 yards of total offense in the last two weeks.

Beem was with Simpson the last time they went to Cedar Rapids, a game in which Simpson won 41-38 in overtime at Clark Field. A tight game it was in 2013, but Simpson will take even a one-point win this weekend as they look to even up their record.

“It’ll be a good matchup and good to go up there on the road on Saturday and get a win,” Glogowski said. “You win Saturday and you get back to .500 overall. I don’t look at it from being a make or break type of game. It’s not about being 2-1 in conference. It’s about playing as well as we can.”