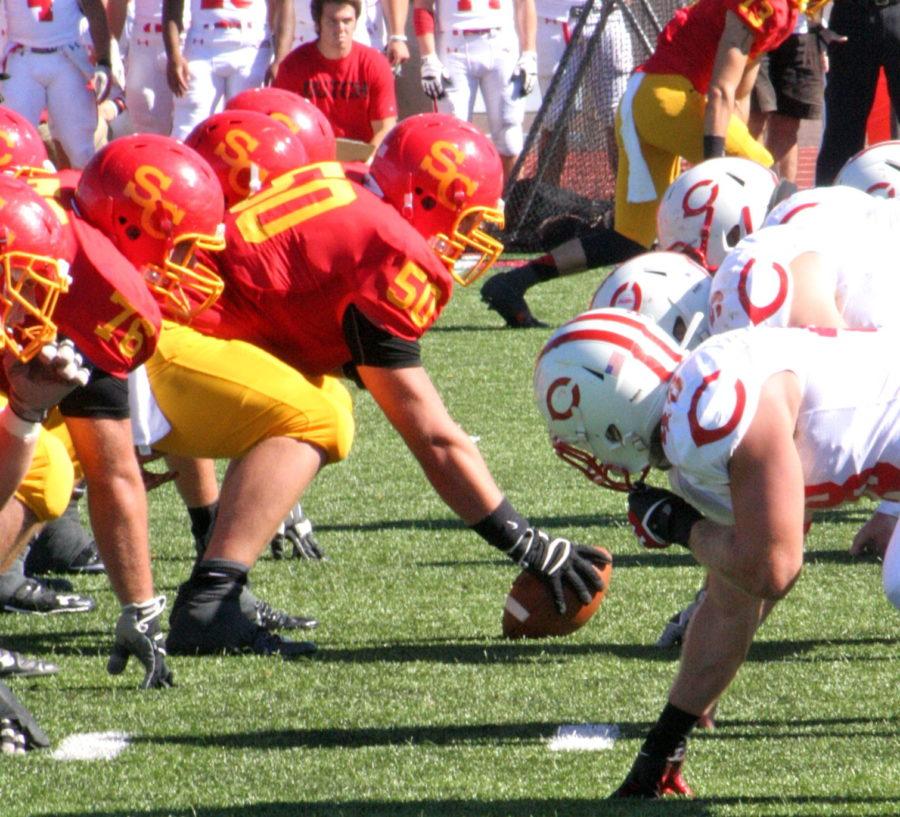 Four-straight games of 100+ rushing yards, three of four with at least two TDs.

2.43 Penalties against – 1st in Division III

It’s clear that 2015 has been the year of surprises and parody in the Iowa Conference. No game is a gimme, and playing favorites doesn’t have much credence.

Dubuque was picked to finish No. 4 in the conference, and here they are 4-0 in the IIAC and at the top of the league after downing heavy favorite, Wartburg.

But if there is one thing for certain, Simpson and Central means rivalry, and on Halloween these two teams will play for a win and bragging rights in a series that goes all the way back to 1905.

Central (4-3, 2-2) is coming off a 27-13 win over Coe as the Kohawks continue a surprising nose dive to the Iowa Conference cellar.

Simpson (3-4, 2-2) on the other hand let a potentially pivotal opportunity slip through their fingers in a 27-9 loss to Loras.

“There is still plenty to play for,” Glogowski said. “But we’ve sure made it difficult on ourselves. There is no doubt about that.”

Both teams will be clawing for a win on Saturday though, with a two-game deficit for the league lead looming ahead.

“They’re a lot like us,” Glogowski said. “They’re probably trying to find their stride a little bit. When you go win loss and win loss in conference it’s hard to get on that role.”

Take care of the ball

The junior picked off two passes, forced a fumble and had eight tackles.

That type of play defines the Dutch defense that has a nose for the ball, generating a +13 turnover margin with the help of 14 picks and four fumble recoveries.

“I don’t know [why they get so many interceptions],” Glogowski said. “It’s probably by how they play things. They’re not a big many coverage team. They do a good job of breaking on the ball.”

Central has yet to lose a fumble this year and also has committed the fewest penalties of any team in Division III.

Simpson on the other hand has recovered nine fumbles, including two last week.

Keeping possession of the ball and forcing Central to cough it up will be key, especially with a Dutch team that has scored 75 points off turnovers to 14 for opponents.

Loras runs around 100 offensive plays per game. Central on the other hand goes for around 55 to 60.

The game will slow down, but they won’t be as straightforward as Loras in their offensive scheme.

“I think the pace will be a lot different,” Glogowski said. “They will be a lot more dynamic in terms of changing and shifting motion.”

Central will go for what’s working offensively, relying on a balanced offensive attack that’s headed by quarterback Riley Gray. Brother Pat Gray joins him in the backfield at halfback, being the team’s number two rusher – behind Riley that is.

They mix it up with wide out Sam Markham who is already just 11 receptions short of breaking the single season receptions record at Central.

“That guy [Markham] kind of makes them go,” Glogowski said. “He was a basketball player his first year and then decided to play football last year. He’s an explosive player.”

A win will make the candy taste better

In each of the last three meetings with the Dutch, neither team has scored more than 21 points.

In 2015, Simpson will likely aim to do the same and continue to utilize a strong rushing attack, win the time of possession battle and put pressure on defensively.

Jordan Beem has run for a league best 621 yards in IIAC play and the Storm are 38th/241 Division III teams in time of possession at 32:41 minutes per game.

The script will likely not change from that, and if quarterback Caleb Frye can improve on an 11 of 28 passing day against Loras, Simpson will be in position for a ‘W’.

Rumor has it that the Storm will be breaking out the all-black uniforms again for Halloween.