A man of many hats: Senior Brock Borgeson wears 51 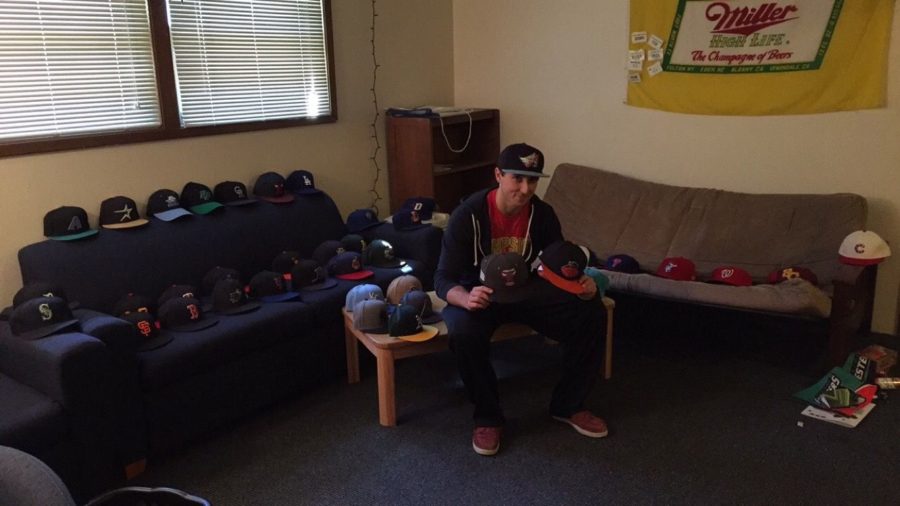 It is safe to say Brock wears many hats -– figuratively and literally.

“Hats that I deem part of the collection, that are New Era 59fifty I have about 51. At least one of every Major League Baseball team.” Brock said.

He started collecting hats between seventh and eighth grade when he bought a Cincinnati Reds road hat with a black bill and red cap.

From then on, he was hooked.

“It was kind of always part of my identity.” Brock said, “My mom said, ‘I don’t recognize you without a hat on.’ Then I started collecting them.”

While some people may like shoes, Hotwheels or guitars, Brock’s soft spot is for hats.

He said he enjoys how they look and likes matching them with outfits.

“His hats also dictate what he will wear normally,” friend and teammate Austin Burlin said. “The clothes he wears usually match the hat he has chosen that day.”

But at an even deeper level, his hats represent his passion for the sports, especially baseball.

“To Brock, his hats represent more than just a collection of hats,” Burlin said. “They represent his vast knowledge for baseball.”

For Brock, there is no such thing as too many hats.

The problem becomes where the hats reside and transporting them from place to place.

Brock said many people will store their hats on hooks or on a rack on the wall, but that is not the best way to do it.

According to Brock, the best way to store a hat is to fold the back part in, which is how they come new. This will help the hat keep its shape and better withstand the test of time.

Brock will sweat in his hats, and they do get dirty.

“There was an instance where I got a lot of white mold on my hats this summer, and my girlfriend’s grandma actually washed them in bleach and put them out in the sun to let them dry and it helped clean them. That was a big save.”

He does play favorites, and has a few he likes more than others, but there is one that stands out as his overall favorite. It is an Anaheim Angels hat from before the team was the Los Angeles Angels, in the 90s when they had Jim Edmonds.

The bill is baby blue and the cap is navy blue. The logo is and angel wing connected to a red upper-case ‘A’. The hat fits him perfectly, and he said he likes the look.

While Brock focuses mainly on MLB and MiLB hats, he is moving into the NFL and NBA.