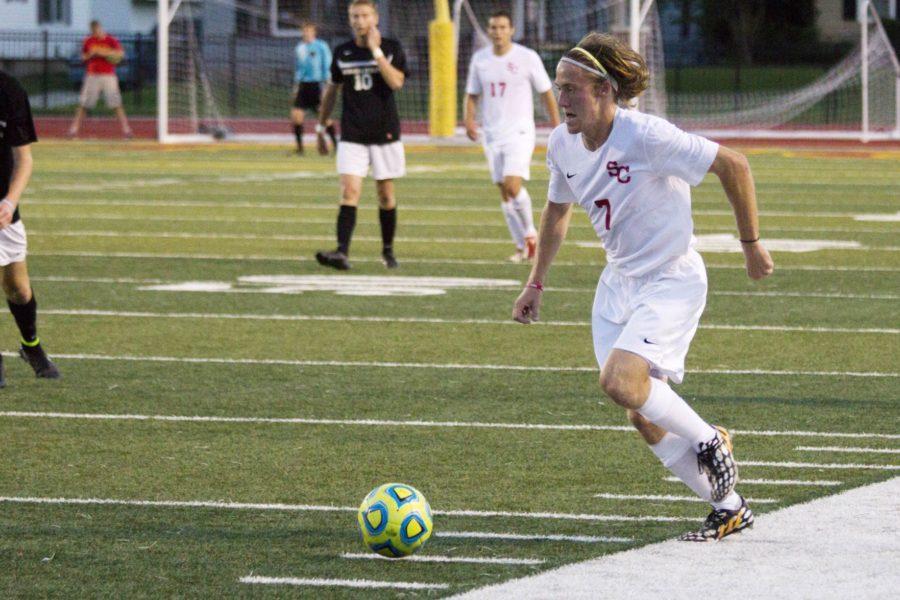 PELLA, Iowa – Simpson nearly pulled the shutout on the rival Dutch, winning 3-1 and not allowing a goal until the 88th minute of play when Central’s Bryce Leonard took advantage of an over-pursuant Austin Schafer in goal.

Despite that miscue, head coach Rick Isaacson thought his team put forth exactly the effort they needed.

“I thought overall that the boys played a pretty clean game today, aside from the final three minutes which got a little chaotic,” Isaacson said. “We played the style of soccer I expected to play.”

Freshman Darius Doswell continued to have a productive inaugural year with Simpson, putting the Storm (6-8-2, 1-2-1) up 1-0 in the 22nd minute. Doswell struck a left-footed one-timer on a deflected ball, tucking it inside the far post for the artistic score – his fourth of the year.

“Luckily, it went where I was trying to put it,” Doswell said. “I made good contact and it slotted far post. It was sweet.”

The 1-0 advantage became 2-0 when Marcus Varnum went up top shelf from the top of the box, scoring in the 49th minute for his second goal in as many contests.

Cody Jacobson put the icing on the cake for Simpson in the 87th minute, tying Varnum for the team lead in goals with his fifth score. Jacobson was able to sneak past the Central (4-10-0, 1-3-0) backline, taking advantage of a misplayed ball for the breakaway goal.

The Storm have had trouble with offensive efficiency this season, creating plenty of opportunities while failing to capitalize. That wasn’t the case on Wednesday though, as Simpson scored on three of its nine shots on goal.

“We were more opportunistic today, but that’s because we’ve learned some lessons along the way in some of our losses,” Isaacson said. “We’ve been working on putting our shots on frame, and starting to challenge goalkeepers and I think you saw that today.”

Schafer wasn’t challenged much on his end though, as the junior in his third straight start made three saves on four shots on goal, evening up his record to 2-2 on the year.

“I thought we played well enough to keep a clean sheet,” Isaacson said. “Again, it [Central’s goal] gives Austin some stuff to wok on though. He’s being doing well stepping in.”

Despite it being only his third start on the season, Schafer appears to have emerged as the starting goalkeeper for Simpson down the stretch in place of Zach McEntee.

The Storm are one point ahead of Coe in the Iowa Conference standings for sole possession of fifth place. Simpson will get a crack at dropping the Kohawks (4-9-1, 1-3-0) even further down the ranks when it hosts Coe on Friday at 6 p.m.

“We are at a point in our season where we have to shift our goals a little bit and have kind of put all of our eggs in one basket, and that basket is the conference tournament,” Isaacson said. “We are just hoping that we are playing our best soccer here as the season winds down.”

“This is a big momentum swing going for us right now as we go into those games [Coe, Wartburg and Buena Vista],” Doswell said. “We have a lot of momentum and feel good going into those games.”