Storm dominate all phases of the game against Buena Vista 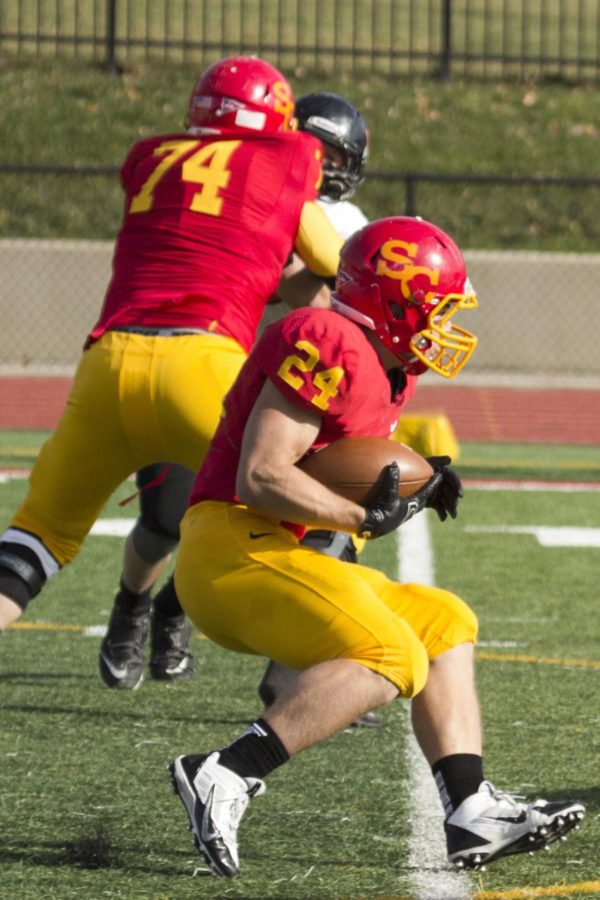 INDIANOLA, Iowa – Simpson won 43-13 on Saturday against Buena Vista, and it was a win in which a 30-point margin of victory was completely indicative of the play on the field.

Jordan Beem had a career-day, generating 238 yards of total offense to go along with a receiving touchdown and two rushing touchdowns to help fuel the win, but the victory was a team effort.

Defensive end Chris McKinnon, who had been battling injuries, was back in uniform and he made his presence known. The sophomore sacked quarterback Tory Beger, forcing a fumble that was recovered by Jake Stearns.

Caleb Frye carried that momentum when he connected with Beem on a pass in the flat. After a few blocks, Beem found the endzone on a 42-yard touchdown strike, giving Simpson a 14-0 lead.

It was all gravy from there.

Patrick Steffen then intercepted a pass, McKinnon forced another fumble and Ryan capped off the turnover streak with an interception of his own late in the second quarter.

The Simpson defense, who had allowed 506 yards of offense in their 2014 loss to the Beavers, didn’t allow Buena Vista on to the scoreboard until ran for a 13-yard touchdown with 9:31 in the third quarter.

The Storm scored in every phase of the game in the fourth quarter to break away from Buena Vista. Beem broke free for a 40-yard touchdown run, Drew Jensen drilled a 40-yard field goal, and Clay Finley threw down Beger for a safety.

A week after missing a PAT for the first time in his career, Jensen went 5 of 5 in that category.

Cole Cook, Adrean Johnson and Finley led the swarming Storm defense. Cook had a team-best nine tackles, Johnson had eight and Finley brought down six Beaver players, two of which were sacks and three tackles for loss. Finley also recovered a fumble.

A lot was learned on Saturday:

For one thing, it was a statement game for Simpson who had lost seven straight Iowa Conference games dating back to a 28-21 win over Luther in the 2013 season finale.

It also showed that Buena Vista was no longer the kryptonite they had been in the previous years. Simpson had lost three straight against the Beavers, not winning since defeating Buena Vista 14-0 in their 2011 meeting.

Additionally, it established Caleb Frye as the set-in stone quarterback. Efficiency would be an understatement for sophomore, who completed his first seven passes and went 15 of 20 overall for 184 yards and two touchdowns. Nathan Russell and Matt Burrell were on the receiving end of Frye’s touchdowns.

While Buena Vista likely won’t be at the top of the Iowa Conference near season’s end, it’s a key win for Simpson, confidence wise.