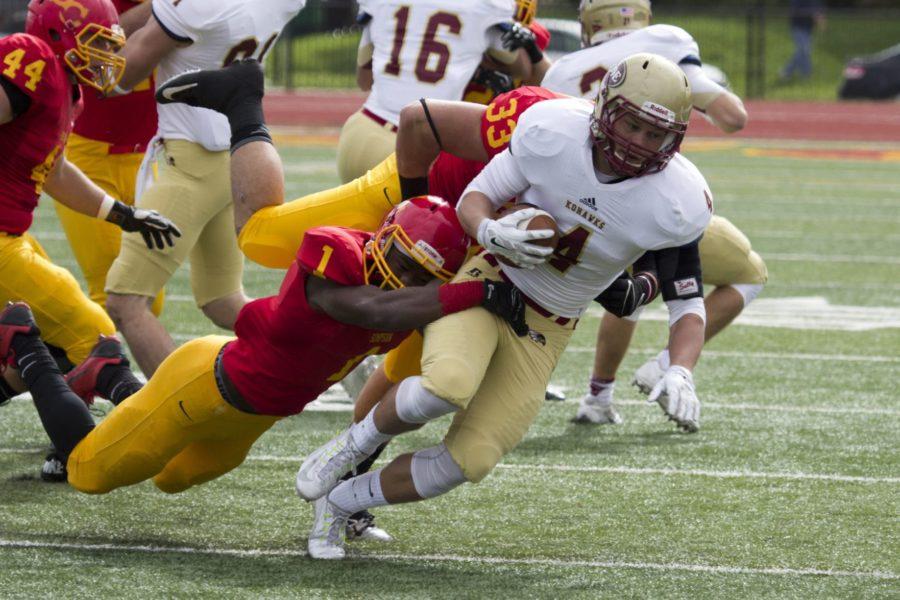 DUBUQUE, Iowa – The eastern Iowa sun broke through the clouds on an overcast day as Loras’ Zach Minch broke an 86-yard touchdown run, putting Loras up 19-9 on their way to a 27-9 win over Simpson on Saturday.

The sun wasn’t always shining providentially on the Duhawks (4-3, 3-1) though, as Simpson (3-4, 2-2) held the NCAA’s second-best passing offense to just six points through three quarters of play, leading 9-6 with 13:49 remaining in the game.

But that’s when the story changed.

After Isaac Frazier sacked Nolan Baumhover for an 11-yard loss, Loras faced a third and 21 from their own 14-yard line.

Frazier and a swarming defensive line nearly got to Baumhover on 3rd down, but a desperation pass deflected off the hands of Josh Schulte for a 29-yard, first down conversion.

Four plays later, Baumhover found wide receiver Nate Even for a 40-yard touchdown strike, exposing defensive back Brandt Seward who fell down in pursuit of Even.

Down 13-9, Simpson looked like they would respond, marching down to the Loras six yard-line on their ensuing drive.

Facing a 4th down and less than one, running back Cole Martin took the handoff and was stood up by Liam Kirwin and Austin Epple, ending the drive and essentially Simpson’s hopes.

It wasn’t the only time the Storm were thwarted on a fourth down conversion in the Loras red zone. Jordan Beem failed to convert a fourth down and one from the Loras 20 late in the second quarter.

Minch then broke his second touchdown run of the day and Baumhover found Even again for an 11-yard touchdown pass to nail down the 27-9 win.

Despite the 21-0 unanswered points by Loras, after allowing a Minch touchdown run with 3:21 in the first quarter, Simpson didn’t permit Loras into the red zone until the game winning 40-yard touchdown strike to Even.

Defensive end Clay Finley showed versatility on the other edge, batting up a screen pass to himself for an interception which he returned for 18 yards. Finley also recovered a fumble, had a pass breakup and a quarterback hurry.

A week after throwing for an IIAC record eight touchdown passes, Simpson’s defense kept the freshman Baumhover to 280 yards on 43 pass attempts, picking off two passes while he threw for two scores.

Patrick Steffen had the only interception.

Minch was the Storm’s kryptonite when it counted though, running for 202 yards and two scores on 8.8 yards per carry.

Beem generated only 3.7 yards per carry but turned a workman like effort, rushing for 125 yards on 34 carries.

Quarterback Caleb Frye struggled to get in a rhythm in the pocket, throwing for 134 yards on 11 of 28 passing, including one pick. Corbin Clark had his best game of 2015, leading Simpson receivers with 79 yards on five receptions.

All of Simpson’s nine points came from the foot of Drew Jensen who drilled three field goals, including a career-long 45-yard boot to put Simpson up 9-6.

Simpson will have a tough road ahead to the top of the Iowa Conference, sitting two games back of IIAC leading Dubuque at 2-2.

The road continues with Central (4-3, 2-2) in the Storm’s final home game of the season on Halloween at 1 p.m.