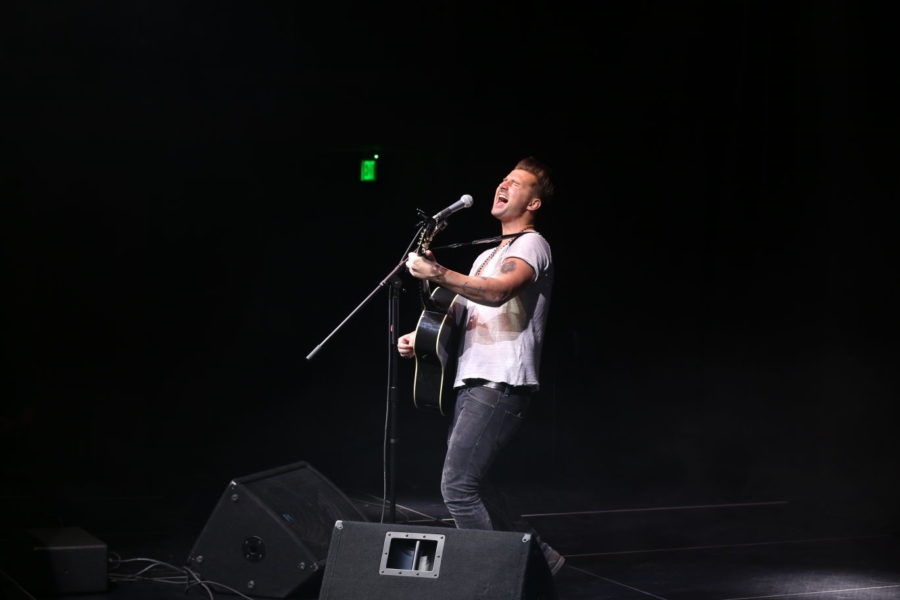 Guitar in hand and a crowded Black Box, John Vesely, better known as Secondhand Serenade, played off the cuff and garnered positive reviews from fans and first-timers alike.

The MySpace musician turned pop-rock one-man band was, according to some Simpson students, the first recognizable act to play on campus.

The band’s signature song, “Fall for You,” was a top-25 hit in 2008, becoming Vesely’s most successful song to date.

In an interview with The Simpsonian, Vesely said the platform by which music is played has changed drastically but didn’t indicate its adverse effects.

“MySpace was a really good platform especially for merging artists to get their music out and to find fans,” he said. “Now, it seems like bands are knocking down doors trying to get peoples’ attention.”

Vesely said streaming services, such as Spotify and Pandora, don’t allow the capacity for an artist to engage with fans, basing the relationship between artists and listeners off of mutuality.

His introduction to the music scene, however, began when his father put him in piano lessons. Coming from a family of musicians, Vesely said he didn’t want to be forced.

By the time he completed eighth grade, he was playing the guitar naturally.

Having a love for acoustic music, Vesely said his sound has evolved – from an acoustic rock edge in his debut album “Awake” to a poppy, upbeat production in his most recent release “Undefeated.”

Since moving to Nashville two and a half years ago, Vesely said he’s experienced different ways of composing songs.

Described as theoretical writing, artists latch on to a concept of a song, like a screenplay, and develop the idea to pertain to a wider audience.

His life is transparent in his work, perhaps most visible in his best-selling album “A Twist in My Story.” Vesely had recently gone through a divorce during its recording.

Soon thereafter, “Fall for You” was produced.

Vesely was not convinced, though, the single would perform well on the charts.

“I thought it was a good song, but I didn’t necessarily it was the strongest on the album,” he said. “Maybe I was just being critical about it. ‘A Twist in My Story’ was my first full-band studio album, and I just didn’t know what to expect. I’m really happy with how it turned out.”

He said his favorite songs to play are “Goodbye” and “Your Call.”

“I just like them all for different reasons,” he said.

Throughout his decade-plus career as an artist, Vesely said he has enjoyed seeing new artists emerge and create original work.

“Obviously, Ryan Tedder and Bruno Mars have done great things in the industry – both in writing for themselves, for other people and being artist themselves,” Vesely said.

“There are constantly new things that are coming out and pioneering and then also a wave of things copying that. Music just recycles itself, but I definitely like to see people take it to the next level and create something new and fresh,” he said.

Vesely said he has a new project to be released early next year.

“It’s just about finished now, and I can’t really talk about it,” he said. “It’s coming very soon, and it’s really exciting.”

Simpson College was the last stop in terms of touring, Vesely said.

In preparation for the project, Vesely said his time and effort have been put forth toward the project.

“I have a pool in my building in Nashville, and I haven’t gone out once. I’ve been pasty and haven’t seen the sun. I’m breaking out because my skin has been pale white, but it’s all worth it,” Vesely laughed.

Vesely hinted at a country-style album and more collaborations with his fiancée, Veronica Ballestrini, with whom he’s collaborated with multiple times beforehand.

Freshman Nicholas Collison said, “I loved how he was so loose with everyone. He was joking around with everyone, and it was awesome. My favorite song was ‘Broken.’ It’s very heartfelt, and it hits the emotions.

Junior Sidney Griffith said, “I thought it was really good. He was really funny, and he played a lot of covers which I liked. My favorite song that he played was ‘A Twist in My Story.’”

Junior Tyger Bottenfield said, “I really enjoyed his cover of Enrique Iglesias. His artificial accent was really good. It was spot on. I thought he was incredibly entertaining. He did more than just songs. He went off the track a little bit, did a couple covers, tried to be funny. I enjoyed it.”