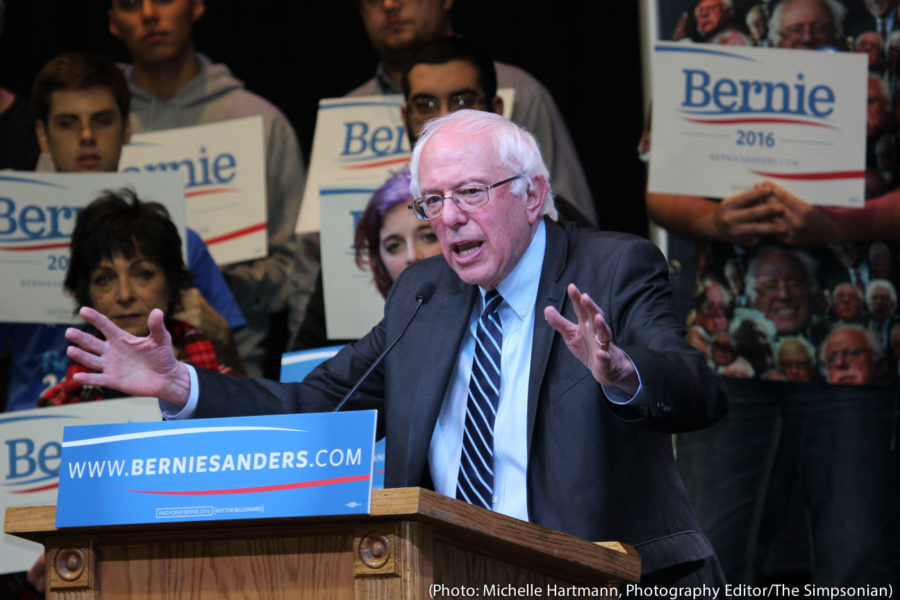 Anticipation filled the Black Box Sunday as “Disco Inferno” blasted through the speakers, the lyrics “burn, baby, burn” being sung by Bernie Sanders supporters throughout the room.

The 74-year-old senator from Vermont made a stop at Simpson College after participating in the Democratic debate held at Drake University on Saturday. When Sanders took the stage, his main points called for a political revolution, a democracy that benefits the common people, rather than the top one percent and better health care and paid leave for working Americans.

“People can understand that something is fundamentally wrong in our country today,” Sanders said in his opening remarks.

Many of Sanders’ views aim toward benefitting the middle class of America and redistributing the wealth from billionaires, something that resonated with many in attendance, as apparent by the enthusiastic cheers.

In light of recent events, Sanders discussed plans for dealing with terrorism and groups such as ISIS.

“We cannot alone address the issue of international terrorism and ISIS, but what has got to happen is a world has got to come together,” he said.

Perhaps the most important topic that students came to hear about was Sanders’ plan to make all public colleges and universities tuition-free. But what does this mean for private colleges like Simpson and Drake? Senior Molly Monk addressed Sanders about the issue:

“Your plan to eliminate tuition at public universities would put many of these private colleges out of business. Do you think that places like Drake and Simpson deserve to be protected, and if so, how?”

Sanders skirted around the question, mistaking Simpson for Drake, and claimed his plan to eliminate tuition at public schools was not an attack on private institutions. He proposed increasing Pell grants and student work studies to make up for the cost of attending a private college.

Monk was not convinced by the senator’s response. She knows work study money does not come close to covering the expenses of tuition and, ultimately, the plan for free tuition hurts the public institutions as well.

“Simpson would not be able to compete with free public colleges,” Monk said. “Currently in Iowa half of the college students attend private institutions like Simpson, and if these colleges have to close their doors, the public universities would not be prepared to deal with the influx of students. So it’d negatively impact public and private schools as well.”

Sanders is one of the last Democratic candidates for the 2016 election to visit Indianola. Hillary Clinton has yet to visit, but there is speculation she will in upcoming months.