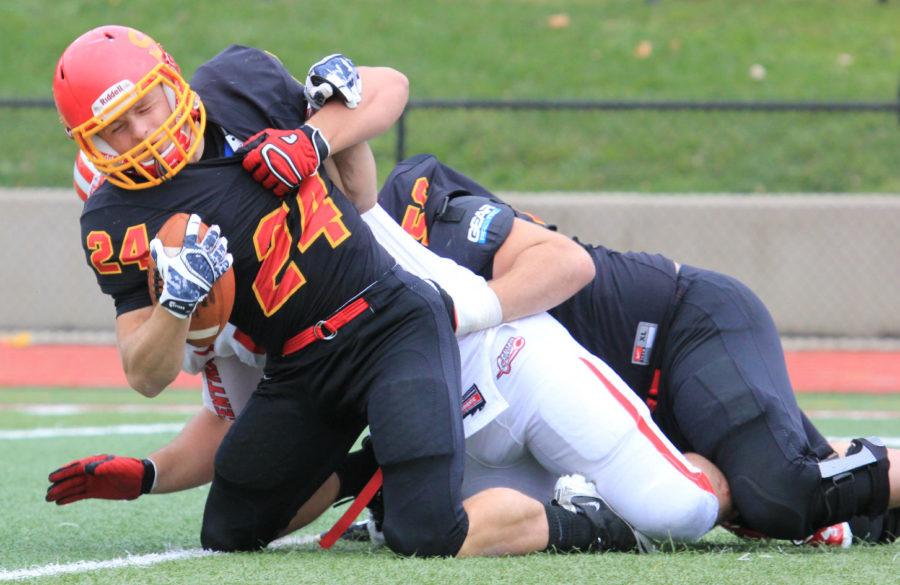 INDIANOLA, Iowa – Saturday was a game of runs and unfortunately for Simpson, the game ended with Central making the last run.

Despite starting off with a 14-0 deficit, Simpson got a touchdown reception, converted field goal and two Jordan Beem rushing touchdowns to rebound for a 24-14 lead.

But down the stretch, Central was better.

Tied 24-24 around three minutes to play, Boland broke runs of 46 yards and seven yards to set up a Kyle Gritsch one-yard touchdown run.

Caleb Frye and the Storm put forth their best two-minute drill, getting four first downs to bring Simpson to as close as the Central 18-yard line.

With a fourth down and 14, Frye was picked off by Mitch Schroeder though as the Dutch weathered the late Storm drive.

Central starting quarterback Riley Gray suffered an injury in last week’s win over Coe that kept him on the sidelines Saturday.

The Dutch turned lemons into lemonade though, getting two underclassmen in quarterbacks Boland and Kohle Helle to step up and lead Central to 519 yards of total offense.

While Boland was the most productive, passing for 274 yards and two touchdowns while running for a team-high 73 yards, Helle added a 4 of 5 day in the air while putting up 63 rushing yards.

The Dutch didn’t play a flawless game, and Simpson forced them out of their mistake-free element on Saturday.

Coming into the game without a fumble on the year, Simpson forced the Dutch to lose two.

Simpson had only been sacked five times all year before Saturday, but the Dutch go to Frye four times, sacking him for a loss of 14 total yards.

What the loss means

By losing, Simpson has dropped to sixth place in the Iowa Conference and three games back of first place Dubuque (6-2, 5-0).

With only Wartburg and Luther on the schedule, Simpson has been eliminated from contention for the IIAC crown and an automatic bid for NCAA postseason play.

But don’t let the Storm’s losses in conference fool you.

Each of Simpson’s three conference losses have been hotly contested. And in each game, whether it was Dubuque, Loras or Central, Simpson had the lead at one point in the 4th quarter.

It’s the difference of one more stop or one more successful drive and Simpson could be 5-0 in the conference. Simpson’s execution late in the game against Coe in an 18-15 win was indicative of the type of execution Simpson needed to close out these tight games.

The Storm are not a 3-5 team and they’ll likely redirect their attention to ending the year 5-5 with wins over Wartburg and Luther.

Simpson will head to Waverly on Saturday to face the Knights (7-1) at 1 p.m.