An opportunistic Simpson team wins over Luther in the season finale 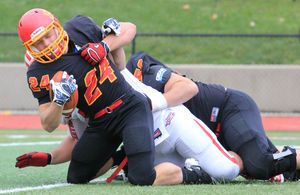 DECORAH, Iowa – Statistics say a lot, but not everything and Saturday’s game against a triple-option Luther team was indicative of that for one reason. Luther absolutely dominated in the time of possession battle (38:11 to 21:49), a scary notion with the second-most run heavy team in the nation, but Simpson was much more efficient as it won 42-28 in the season finale.

After a scoreless first quarter in which Simpson punted in its first two drives, Luther (4-6, 3-4 IIAC) established a 7-0 lead at 13:32 in the second quarter on a Brady Letney touchdown pass to Jon Cochrane.

The Storm (4-6, 3-4 IIAC) not only took the lead, but they never let go of it from then on out, scoring in six of the next seven possessions – including a 21 point outburst in the second quarter.

Simpson scored in flurries to help mask the lopsided time of possession margin.

Tied 21-21, running back Jordan Beem gave the Norse defense a reoccurring nightmare when he ran for two touchdowns within 10 seconds of each other, putting Simpson up 34-21 late in the third quarter to put the foot down on the Norse.

Beem’s first rushing touchdown in the sequence, and second on the day, was a 12-yarder.

Simpson took a shot on the kickoff with an on-side attempt and it worked as Luther fumbled it, giving the Storm the ball at the Norse 24.

This time Beem had to go double the distance for the score but he did with equal ease, scampering into the end zone on the first play from scrimmage after the fumble recovery.

Luther had only a few more gasps left, but their final bit of hope was snuffed out when Jake Stearns sacked Letney on 4th and five from the Simpson 20 with about six minutes left to play.

Stearns’ play was huge considering the Storm gave up a 35-21 fourth quarter lead against Luther last season, allowing the Norse to score 21 unanswered to win.

Luther managed to outgain Simpson, 396-387, but field position proved to be more important. Six times Simpson started with the ball at least at its own 40-yard line, and three times in Luther territory – including on Simpson’s last possession after forcing the Norse into a turnover on downs.

The Storm scored four touchdowns during those six possessions, helping quell the effects of a Norse rushing attack that put up 354 rushing yards on 64 carries.

While they only passed eight times for 42 yards, Luther passed for its first two touchdowns of the season in their loss.

With three returns for 94 yards on Saturday, Jergens ended the season as the Iowa Conference leader in total kickoff return yards (694) and kickoff return average (24.8).

Beem polished off a all-conference worthy year with a season and career-high 211 yards rushing to give him eight 100-plus rushing games on the year and seven in a row to finish the season.

Beem also ran for a 52-yard touchdown earlier in the game on his way to three rushing touchdowns on the day. The junior from Southeast Polk High School hadn’t done that since Oct. 19, 2013 against Loras.

The “Fryer” got hot

Simpson will look forward to having Caleb Frye for two more years.

After showing an impressive athleticism early in the season, Frye finally began to smooth things out and really come into his own late in the season.