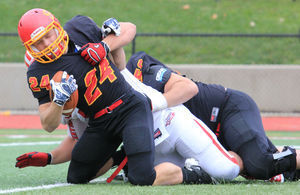 Jordan Beem came into the 2015 season after earning honorable mention Iowa Conference honors in 2014. With running backs Tyler Kenny and Ethan Calvert graduated, Jordan Beem was expected to be “the guy” in the backfield, and was now a leader in a very young offense.

Through the first three games this season, Beem was on pace to run for roughly 600 yards and had yet to run for a touchdown. These stats would have been nice, but not noteworthy in the conference or in Simpson history.

Beem’s season would be anything but pedestrian though. The next seven weeks, Beem would tear up the Iowa Conference on his way to a first-team All-IIAC honor. It took some digging deep to change it around though.

In week one Beem lost a fumble, only his third in 239 career carries up to that point, but he also ran for 121 yards and looked to be on pace for another good year.

The next two games were speed bumps though, limiting Beem to a combined 68 yards rushing on 28 carries while he still was without a rushing touchown.

Running back and kick returner, Davey Jergens, was named IIAC Offensive Player of the Week in week one, and was making a push for more carries in the backfield.

Simpson was also adjusting a new offense under offensive coordinator Jeff Judge. Judge came in during the summer, replacing Joe Beschorner who moved on to Minnesota State-Mankato.

Beem could be that go to guy and he decided it was time for him to take that role.

“That one game, I just decided I’m going to hit the ball harder,” Beem said. “It doesn’t matter what it looks like up front, we might make some mistakes, but we are just going to hit things harder as a whole.”

The first glimpse of the turn around came actually on a passing play. Quarterback Caleb Frye hit Beem on a pass in the flat leading to a 42-yard touchdown pass.

About four minutes later, Beem had punched in his first rushing touchdown of the season, a five-yard score. Beem topped off a 43-13 drubbing with a 40-yard touchdown run to finish off the day.

It was on, and the turn-around you’ll see is a perfect reflection of his determined running style and approach. At 5 foot 8 and roughly 175 pounds, Beem can’t rely on size.

While he can hit the NFL Blitz turbo when he sees a hole, Beem isn’t a Chris Johnson sprinter converted running back. He’s got wheels, but his most remarkable qualities are vision, elusiveness and patience behind his blockers.

“For being five foot and whatever, he’s really slippery,” Glogowski said. “He’s a very hard kid to tackle because he keeps his feet moving,”

With all the tools clicking, here’s what Beem produced in conference play.

During that span, the 2nd Team Preseason All-American shattered his own record in rushing yards in a game, longest run, carries in a game, while tying his career-high in rushing touchdowns in a game.

Beem is always thoughtful and never boastful, giving much and almost all of the credit to Simpson’s offensive line of Blake Bergstrom, Dustin Ihns, Blade Bradley, Corey Meyer, Blake Beard and Sam Kline as a utility.

“Up front, our offensive line was just stout all year long in helping run the ball,” Beem said. “You really want to get those guys recognition, and that includes even getting all-conference honors for myself because it reflects what they did up front.”

One of the biggest lines in the league at roughly 285 pounds per man, Simpson only allowed 11 sacks, second fewest in conference to a Luther team that passed the fewest number of times in NCAA Division III football.

Beem exploited gaping holes all year, posting touchdown runs of 73 yards in back-to-back weeks against Central and Wartburg, and then a 52-yarder in which he went untouched on the grass field at Luther in the season finale.

All-conference honors are voted on by coaches and IIAC stats are used exclusively to determine the team, deeming those numbers as the fairest representation of how good a player was relative to the others in conference.

This is what the Iowa Conference coaches saw when naming Beem to the first-team as a running back. A whole lot of “1sts” next to his name.

Considering there are 241 NCAA Division III teams, Beem’s rankings in Division III football as a whole aren’t anything to turn your nose up either.

Beem’s 232 carries matched his carries total from his freshman and sophomore seasons combined, and at 12th in the nation in carries, Beem never once sat out a game.

Beem’s season stacks up as the seventh most rushing yards by a Simpson player in school history and the only the fourth time a Storm running back has reached the 1,000-yard milestone in a season since the turn of the century.

“I think he is an Iowa Conference MVP candidate to be honest with you,” head coach Jim Glogowski said.

The junior became the first Simpson running back to rush for at least 100 yards in seven straight conference games since running back Ricky Gales did so for Simpson in the late 80s.

Not even Guy Leman, who scored an IIAC record 31 touchdowns in 1998, completed such fate, coming up just two yards short of 100 in a game against Upper Iowa (a previous IIAC member) in that same season.

Staying healthy and averaging at least 160 yards per game will be the keys.

Easier said than done, much easier.