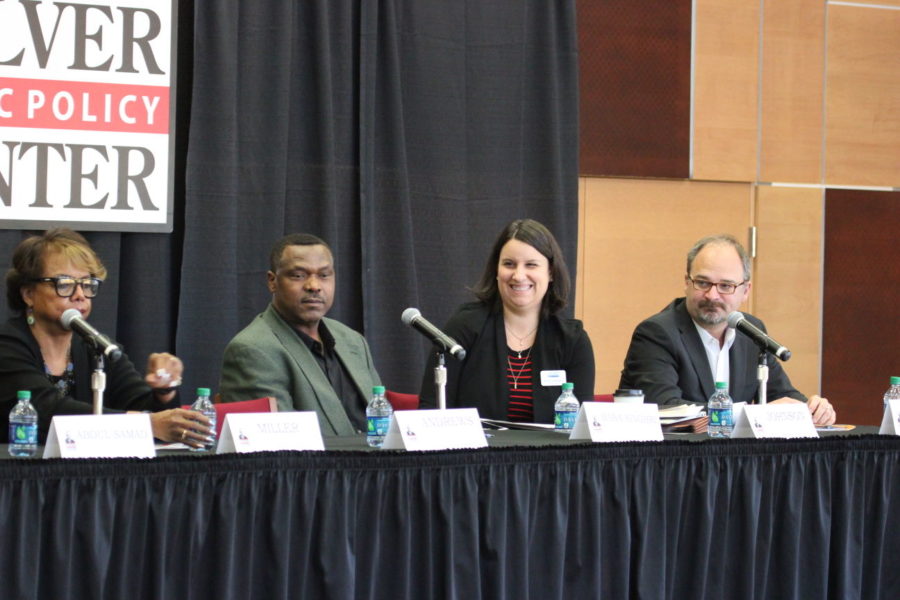 Panelists engaged attendees in critical discussion of the Iowa criminal justice system at the Culver Public Policy Center’s Criminal Justice Reform Workshop. One of many held in various colleges and universities across the state of Iowa, the workshop leads up to the Iowa Brown and Black Presidential Forums in December and January.

Topics up for debate at the three-hour workshop held on Nov. 9 in Hubbell Hall included criminal justice reform in Iowa, restorative justice and conflict resolution programs and re-entry programs for recently released prisoners. Within each discussion, racial bias, probation and juveniles were addressed directly.

As is evident by events headlined in national news, such as the deaths of Eric Garner in New York City and Mike Brown in Ferguson, Missouri, racial bias in the criminal justice system is a prominent issue facing the U.S. Iowa is no exception.

Erica Johnson, advocacy director of American Civil Liberties Union in Iowa and one of the panelists, said, “ACLU National did a study two years ago and found that there are huge disparities in terms of arrest rates for marijuana. In Iowa, you are eight times more likely, if you’re African-American, to be arrested for possession of marijuana.”

Additionally, prisoners charged with non-violent crimes receive harsher punishments than those with violent crimes. Johnson went on further to discuss solutions, such as the new reform bill and reaching out to state legislators.

According to Tom Newkirk, a civil rights attorney in Des Moines, judges, juries and defense courts are also responsible for the racial disparities plaguing the criminal justice system.

“Judges sentence blacks more harshly than whites for the same crime,” he said.

Jerry Bartruff, director of Iowa Department of Corrections, said, “The further the individual gets in the criminal justice system, the more difficult it is for them to return to their families, to find a job and to do the things we all do on a daily basis.”

Bartruff further discussed the population of blacks in prison in comparison to whites. With an estimate of 8,300 people currently in prison, 2,093 of those were black. He also emphasized that the difference between whites and blacks returning to prison under supervision is the same.

“That’s because of our dedication,” Bartruff said, “and because of what we know about what works, and by looking at risks, needs, and responsivity, we can make a difference.”

Betty Andrews, president of the Iowa-Nebraska NAACP State Area Conferences of Branches, said there are a lot of what she called “toe wetting issues.” People are willing to stick their feet in, to be upset about the injustice occurring, but they aren’t fully committed to diving in and taking action for a change.