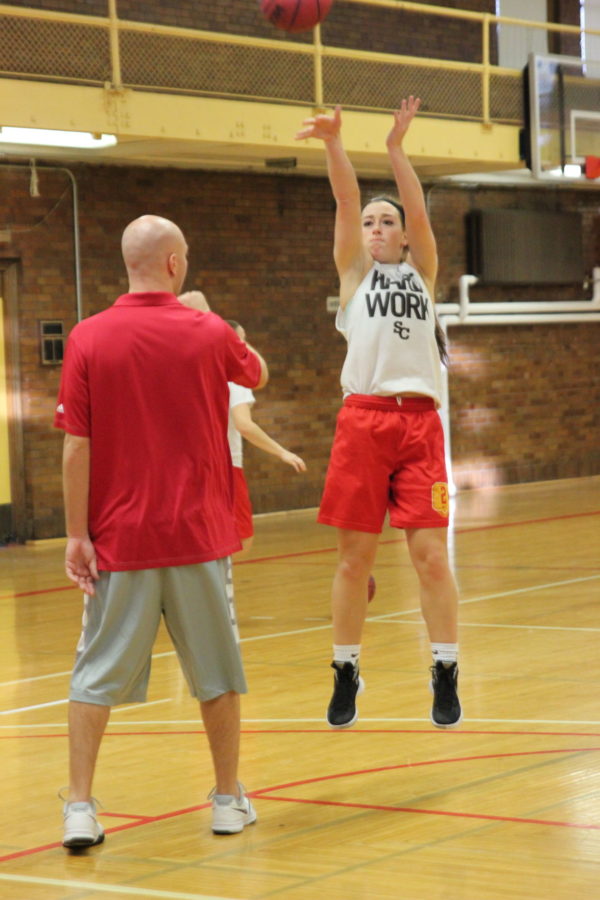 With an experienced lineup returning and a mix of young players ready to make a name for themselves, the Simpson women’s basketball team is primed for a big year.

The Storm finished last season with a record of 16-10 and 6-8 in the IIAC, despite ending the year on a three game losing streak, but return a majority of last year’s squad, including two all-IIAC selections in Brittany Hedrick and MacKenzie Haupt.

A “team without a star” is how coach Niemuth refers to this year’s group, saying the team will have to rely on team basketball and unselfish play to be successful.

“I think the main thing is right now, we’re starting to get that we’re going to have to get it done as a team and they’re playing like that. They’re sharing the ball well, they play great team defense, they’re taking care of the little things and as long as we can keep that focus of understanding that everybody’s got to contribute, I think we have a chance to be pretty good,” Niemuth said.

Coming off of a season where they led the IIAC in scoring defense, allowing just over 59 points per game, Niemuth still sees room for improvement within the Storm’s matchup zone defense.

On the offensive side of the ball, the Storm have some improvements to make after finishing last year fourth in the conference in scoring offense at exactly 69 points per game. Being able to rebound the ball off of the first miss and getting out and running will be key cogs in the Storm’s offensive game plan.

“I like to play fast on offense and get some easy points before the other team’s defense can set up. We weren’t big enough to rebound and run the way I wanted last year. I think we are this year, so I’m hoping we can score more points off of our defense. That’s what we’ve been working on,” Niemuth said.

As for expectations for the season, barring injuries, Coach Niemuth expects big things from this group.

“If we stay healthy, we have a chance to be really good. I’m excited about the balance we have and the experience, but every year if you don’t stay healthy, you have some challenges. We obviously want to win the conference championship, we want to get back into the NCAA tournament, but I don’t want to limit us. I want to be as good as we can be and I think we can be a little bit better than that.”