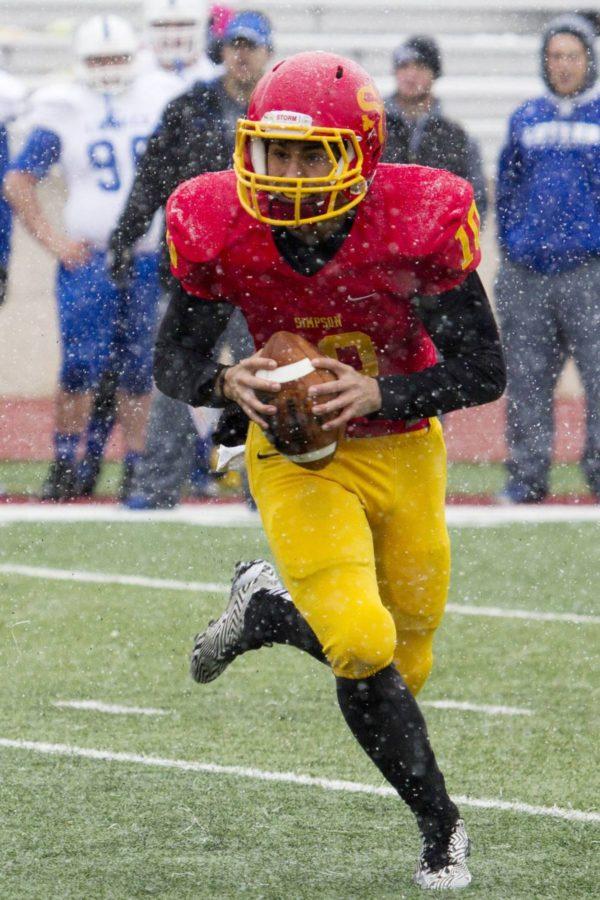 WAVERLY, Iowa – You may have heard your late grandfather or some outdated commentator on TV say the adage, “close only counts in horseshoes and hand grenades.”

Unfortunately for Simpson, close doesn’t count in football as the Storm lost 51-45 to No. 21 Wartburg in an arena-football-esque shootout on Saturday, suffering their third one-score loss in conference this season.

“What do you say?” an exasperated Simpson head coach Jim Glogowski said. “It’s 51-45, you onside kick the ball twice to get it back late in the game! It’s an unbelievably difficult loss.”

Wartburg’s offense was the story on Saturday.

Wartburg obliterated that number, generating a staggering 721 yards of total offense (341 on the ground, 380 passing) to win the shootout.

“Certainly, as a defensive coach, that’s not what you want to see,” Glogowski said. “The offensive guys did a great job and kept battling. But we could not get our defense off the field.”

Simpson (3-6, 2-4) had arguably its best offensive game of the season, posting 567 yards on 81 plays. And on the first play from scrimmage, Simpson showed that its offense was ready to play. Jordan Beem used a gaping hole to go for a 73-yard touchdown run, eclipsing the 1,000-yard rushing mark for the season.

Despite the Storm’s fervent comeback, the Knights would never relinquish that lead.

Down 38-24, Simpson got within one score when quarterback Caleb Frye found wide receiver Corbin Clark for a 34-yard touchdown reception, their second such connection of the day.

Down 38-31, Wartburg quarterback Logan Schrader, the all-time leader in passing yards, completions and touchdown passes, appeared to put the nail in the coffin with an 88-yard touchdown run.

The Storm kicked right back when Frye found Nate Connealy for a six-yard touchdown pass on an off-balance fade, making it 45-38.

After a failed onside kick, Schrader broke a 30-yard touchdown run right before Simpson made a final gasp, a 32-yard touchdown pass from Frye to freshman Sam Bartlett.

A second onside kick failed for the Storm, Wartburg got in victory formation and Wartburg extended its home-winning streak, which dates back to Nov. 2, 2013.

“Like I said, that’s the game,” Glogowski said. “The football gods didn’t smile down on us.”

The loss continues an exasperating season that seems so close to being a stellar one yet so far.

One of the brightest points in Saturday’s loss was Frye who tore up the conference’s best scoring defense for 132 rushing yards and 333 passing yards on 24 of 42 in the air, four of which went for touchdowns.

“I think Caleb made that next step,” Glogowski said. “He made some phenomenal plays. All of our receivers made some great catches.”

Frye stepped up to run when needed to, didn’t force plays and was interception free.

Beem had his sixth straight 100-plus yard day on the ground, grinding out 109 yards and two touchdowns on the ground.

Simpson finds itself in the same position as last year, 3-6 looking to end the season on a winning note against Luther (4-5).

They’ll head to Decorah on Nov. 14 for a 12 p.m. season finale against the Norse.

“We have a whole different operation to defend with the triple option in Luther, and we look forward to playing better next week,” Glogowski said.