Storm test themselves in exhibition with Drake, get 17 from Haupt in loss 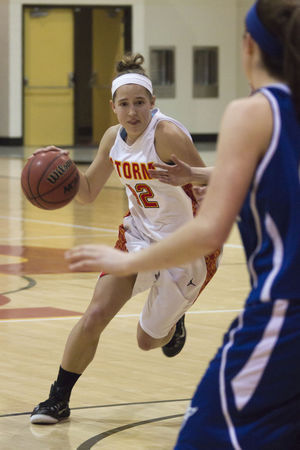 DES MOINES, Iowa – Mackenzie Haupt scored 17 points, Morgan Mauro had 12 and the Storm shot 9 of 18 from three-point range in a 94-61 loss to Division I Drake University in exhibition play on Sunday.

The goal for Simpson was to get on the court and work on its game, more so than getting a victory.

The Storm had a respectable offensive performance at the Knapp Center, shooting 24 of 59 (41 percent) although rebounding and taking care of the ball is where the Division III to I difference was shown.

The Bulldogs outrebounded Simpson 52 to 29, subsequently scoring 44 points in the paint for 14 for the Storm.

Simpson would also turn the ball over 22 times, allowing Drake to score 32 points off turnovers.

Drake’s Lizzy Wendell accounted for the final scoring margin with 33 points, tearing up Simpson for a 12 of 17 shooting performance to go along with eight rebounds, five steals and two blocks.

Britney Boland added eight points and had a team-high seven boards for the Storm. Maddie Bosworth started at point guard and dished out a team-best five dimes.