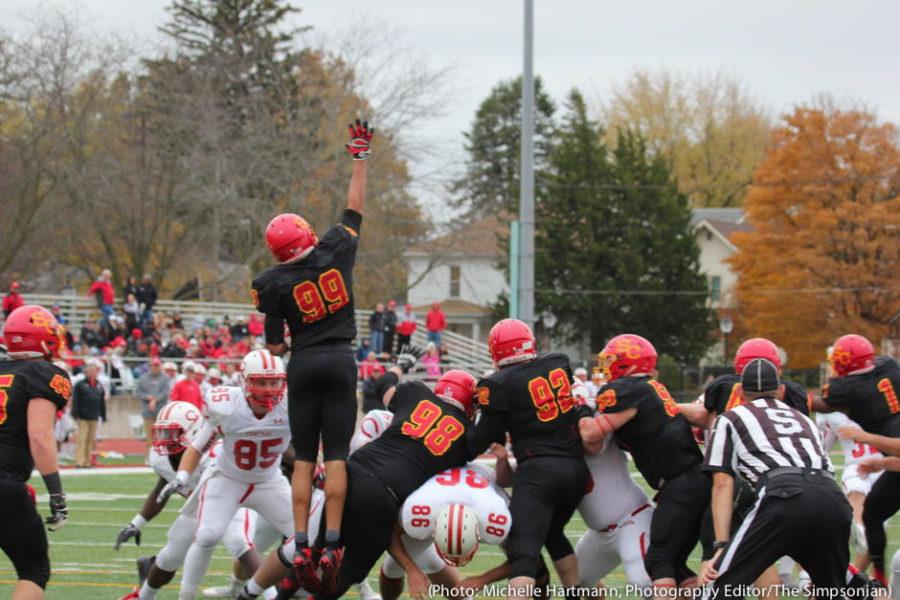 Leading 18-15 over Coe with under 30 seconds remaining in the game, the Kohawks were driving, facing a 2nd down and 10 from the Simpson 30.

The Storm were on their heels, needing a stop or else Coe was going to execute an 88-yard TD drive to steal the game.

Coe quarterback Josh Rekers took the snap out of the shotgun, looking up field when Frazier came untouched off the edge, sacking Rekers and taking the air out of the Coe drive.

For Frazier, this was just one of his conference-leading eight sacks, but it was a defining moment on his year thus far.

“It was probably my favorite play,” Frazier said. “Clay kind of took one for the team and went inside to take a double-team for me so that I could come in the inside. It was definitely a big moment in the game. It was a fun moment.”

A junior varsity player his freshman year, playing only six games and recording four tackles and zero sacks his sophomore year, the questions arises: How did Frazier turn it around this year?

Frazier insists nothing changed. The recipe was hard work and experience.

“I’ve definitely felt more comfortable,” Frazier said. “I was really inexperienced last year, but a lot of people got hurt so I was kind of thrown into it. But this year I’m a little bit more prepared.”

Despite losing 27-9 to Loras on Oct. 24, Frazier had five tackles, two sacks, three tackles for loss and two forced fumbles.

These numbers have helped create one of the best defensive fronts in the league to go with Clay Finley, Jake Stearns and Chris McKinnon amongst others.

Despite blitzing less a team this year, Simpson has created 20 sacks this year, second in the conference.

“I think our two defensive ends (Finley and Frazie) are the two best in the league,” Glogowski said.

At 6-feet-4-inches and 210 pounds, Frazier isn’t going to resort to a smash-mouth style to get to the quarterback. Instead, the junior from Marion uses speed and agility to apply pressure.

“As far as moves go, if it’s just a speed rush I’ll go on the outside. Otherwise, it’s a quick spin underneath,” Frazier said.

That’s where his work as a track athlete in high school and here at Simpson has paid off.

“The development of Isaac is exciting,” Glogowski said. “He’s a track athlete.”

He’s definitely not afraid of going one-on-one against quarterbacks, looking to make plays in open space.

Frazier was on the cusp of two more sacks last Saturday in a 51-45 loss to Wartburg, and while he might not get many against Luther’s triple-option running attack this week, the goal doesn’t change.

“Our mindset going into games is that it starts with us,” Frazier said. “So if we do well, then everyone behind us will feed off us.”