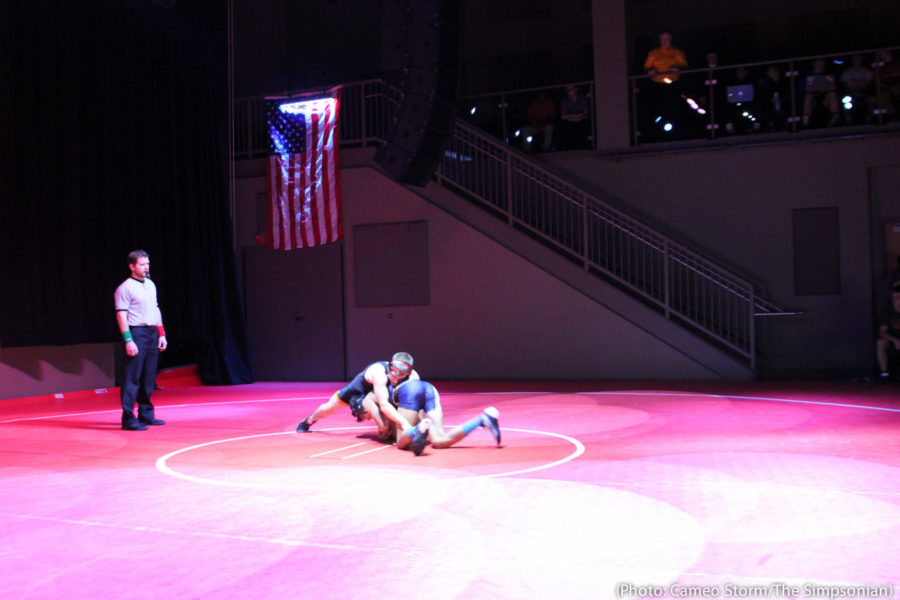 A meet in the Black Box on Tuesday against Cornell College and Graceland University is a prime example.

“I want our guys to leave Simpson having a fun experience and having had a good experience that they’ll remember,” coach Nate Hansen said. “I think doing those sort of things will help that. I love winning and I know winning for them is a big part of having fun, but we’re in a tough conference.

“We’re in a place where we’re not always going to get the result we want. We’re going to keep working on that, but I think doing things like this is adding to their experience and is what it’s like being a Simpson wrestler.”

The team wrestled once in the Black Box last year as a preview for the conference meet, but Tuesday was the first time against other schools.

Assistant coach Joe Skow said, “I thought it looked good, it felt good, we packed the house. It was full. It was overflowing into the Kent Center. With the lights and the music, it was perfect.”

A less obvious part of Tuesday’s meet was the camouflage singlets worn in the dual against Cornell. Simpson has red digital camo singlets to wear once a year in honor of the armed forces. They wore them Tuesday and honored hall of fame coach Darah for his service in the United States Navy.

They used two of their ideas early, but they have at least one more fun event planned. On Jan. 5 they plan to wrestle Dubuque on the center mat of a Warren County meet in Blake Fieldhouse. Hansen said all of the high school teams will be wrestling there that day, and Simpson will have the center mat for the third set of duals of the day.

Skow and Hansen split the social media duties. “I’m into photos a lot, so I like to do a lot of photo editing. I did the Storm Spotlight this preseason to get people jacked up about all of the new guys,” Skow said.

This week, they will start putting out their weekly team videos. Skow said they usually go with the flow on fun events. They live and breathe the sport and will do what they think their guys will enjoy.