Wrestling team looking to pin down at the top 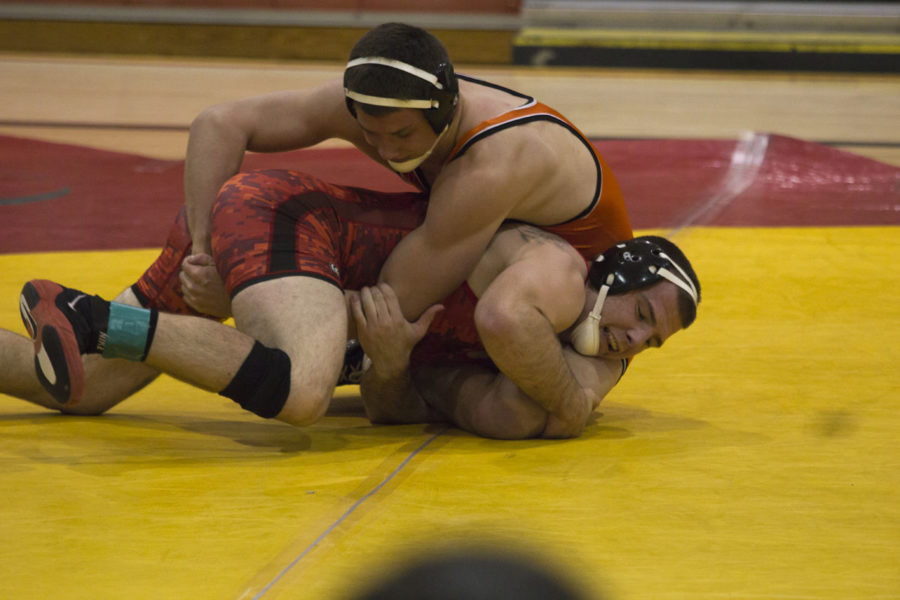 Wrestlers and coaches have high hopes for team and individuals in the upcoming season.

Sophomores Devan Berrian and Jonathan Melton are both ranked in the top 20, and they are not satisfied with that.

“I came in ranked lower than I thought I would be, so I’m not too happy about it. However, I’d like to have a lot more guys on the team ranked with me,” Melton said.

Berrian and Melton may be joined in the rankings soon. Assistant coach Joe Skow predicts senior Brett Roberts will be ranked in the near future.

Aside from personnel rankings, Skow has high hopes for the team.

“Goals, I would say four all-Americans, five national qualifiers at least and finishing as a team in the top 15 in the country,” Skow said.

This may seem steep, but Skow isn’t just throwing out numbers. The IIAC is one of the toughest conferences in the country, and finishing fourth would put Simpson within the top 15.

“If you look at the skill level of our guys, we have an incredible amount of talent. We’re just young. So as soon as one of those guys decides to break through that barrier I think we’re going to be set.”

Mentality is very important to winning. Many younger wrestlers have to find the mindset and confidence to be successful at a higher level of competition.

“Having last year under my belt, I know what to expect. I know what it takes to get started and what I have to do to be where I want to be at the end of the year,” Berrian said.

Berrian and Melton both did well towards the end of last season after gaining their stride, and head coach Nate Hansen wants to keep their momentum going.

“I want to keep building from where we left off last year. We got some guys that started to believe they could win at this level. Not that we didn’t have that before, but we’re starting to see some of those results. Guys are beating top-20 guys and starting to see themselves in the rankings,” Hansen said.

The team gets the chance to test their skill Tuesday against Graceland and Cornell in what has been called the Triple Triangle of Terror. Simpson is excited for a chance to face 12th-ranked Cornell and prove they belong alongside teams of that caliber.

“Whether they’re wrestling at 157, 184, the heavyweights, I think there will be complete domination. I don’t want to single anyone out. I’m hoping they all do well, but I’ve got my eye on some of the middleweights,” Shane Cox predicted.

The middle of the lineup is one to watch. They are deep at most weights, but deepest in the middle. There are many talented wrestlers at those weights and a lot of competition to be the starters.

The Storm won’t open up Iowa Conference play until Nov. 18 when they head to Wartburg.