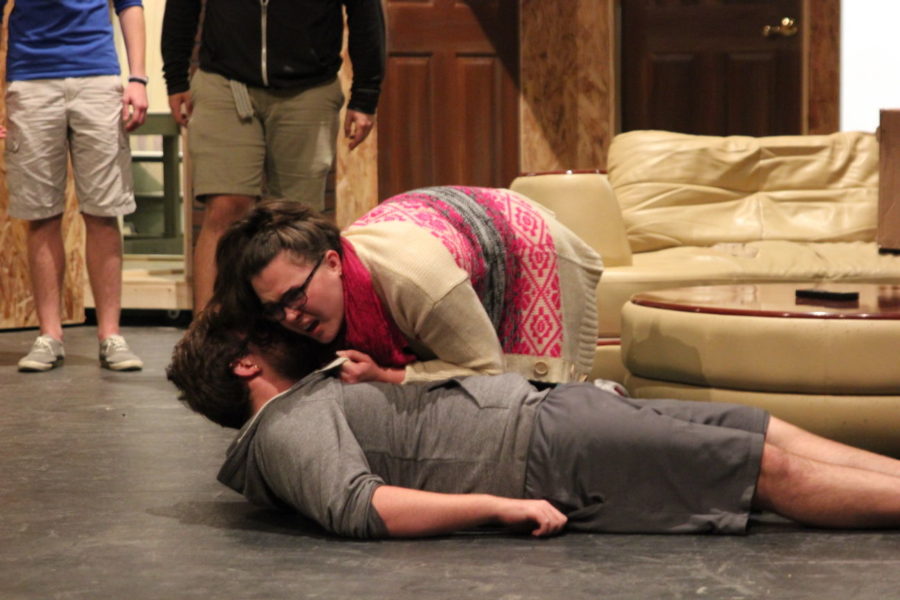 Theatre Simpson is anything but quiet as it prepares to perform its production of “Noises Off” by Michael Frayn on Nov. 20-22. The fast-paced British sex farce is a slapstick comedy full of outrageous humor.

For sophomore theatre major Braeden Ingersoll, “Noises Off” will be his fourth Simpson production.

Much of the humor in the show is right up a college student’s alley, he said.

“As a college kid, dirty humor is still really funny,” he said. “We still have that childish snickering and things. There’s a lot of double entendres and suggestive themes.It’s just a funny show. There is so much humor that’s packed into this.”

In the three-act show, the cast attempts to put on a theatre production of a show called “Nothing On,” which goes terribly awry. In the first act, the audience sees the first act of n“Nothing On” from the audience’s perspective, while the second act shows what happens behind the curtain. In order to successfully convey this change, Theatre Simpson had to create a two-story set that could also rotate.

“I don’t think we’ve ever had a build quite this large,” Ingersoll said.

Senior Randa Meierhenry attributes the enormous undertaking of creating the set and finding the talent needed for the show as the factors that kept Theatre Simpson from working on this show until now.

“You have to have a group of people who are high energy, who can memorize their lines quickly, who can do a British accent, who can juggle all these things all at once,” she said. “This is the fastest that we’ve ever had to be memorized for a show just because of the physical needs of the show. You can’t have a script in your hand and do it because it will mess you up.”

Because of the aspects specific to slapstick comedy, the cast also has to be very close and comfortable with each other.

Ingersoll agreed and said working on the sexual reference of the show becomes difficult when the cast isn’t comfortable with each other.

“Being such a close company always helps out. It expedites the process,” he said.

It helps that there is no lead in the show; every character is a main character.

“There’s no lead. Without one person in the cast, everything falls apart,” Meierhenry said. “Even just having one person missing from rehearsal is just a disaster.”

Every facet of theatre is present in the show. There will be nothing missing from the production, according to Ingersoll.

“There’s love, there’s drama, there’s humor, there’s a little bit of everything in ‘Noises Off’” he said.

For Meierhenry, “Noises Off” will be her 10th and possibly last Simpson production as an actress. She hopes the play will show the audience what it takes to make a theatre run.

“I think they will walk away with an appreciation of what happens backstage of an actual production,” she said.

Overall, the cast is excited for the Simpson community, as well as friends and family, to see the show. Ingersoll hopes it is something Simpson will be proud of.

“It’s three acts, two levels, eight doors, so much coming together, and I think it’s going to be something that Simpson is going to enjoy to see.”