Upset of No. 30 Augustana stunted by late-losses 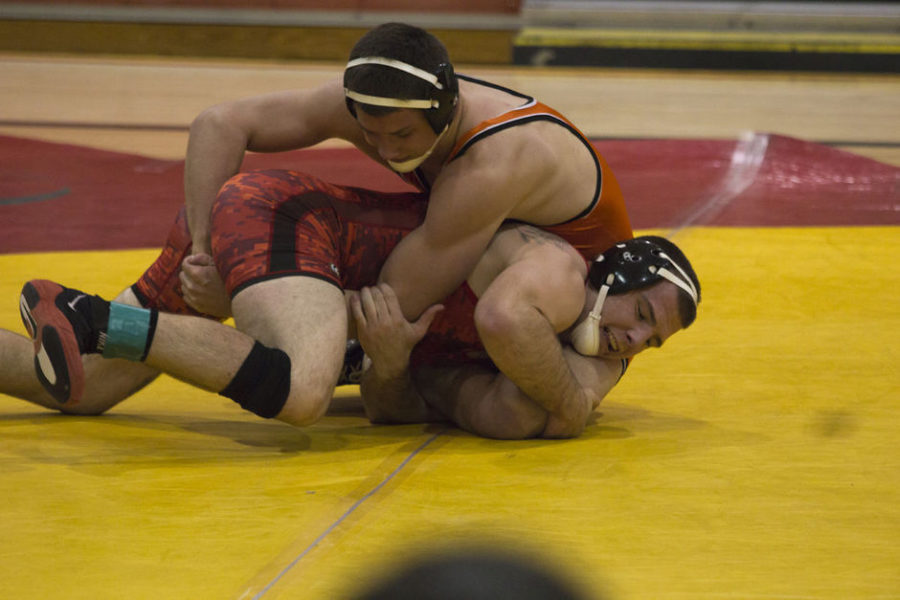 INDIANOLA, Iowa – 19 was the key number on Wednesday, both teams went on 19-0 runs although No. 30 Augustana College got off to a better start as the Vikings beat Simpson 31-19 at Cowles Fieldhouse on Thursday night.

“He [Head Coach Nate Hansen] is going to feel good about most guys out there,” junior Jake Mize said. “They showed a lot of fight in every match and that’s what he is looking for at this point in the season.”

Simpson was dominated by Augustana the year before, showing great improvement in the loss.

“We had a good fight, definitely some good fight, ” assistant coach Joe Skow said. “It was a lot different from last year. Big improvement wise for us and there were some big swings.”

Simpson was without its usual wrestler at 133, putting freshman Deven Acevado on the mat at 133 as the Storm quickly fell behind 12-0 following two pins at the lower weight.

Mize grinded out a 12-10 decision at 157 to give Simpson their first lead of the night as the Storm gained momentum.

“[I’ve] been better, [I’ve] been worse,” Mize said. “I kind of slacked in the middle of the match and got better towards the end.”

The tides turned when Alex Bowers won by major decision over Spencer Ward at 174, leading into nationally ranked Thomas Reyhorn who handed Brett Roberts his first loss of the season by pin.

“Brett is doing well, he’ll come back and be good,” Mize said. “I know that.”

Simpson had one last gasp at 197 with the imposing DeVaughn Scott on the mat. Christos Giatras was able to stall and hold on to a 8-7 win, staving off the Storm who trailed only 22-19 at that point.

Scott, a freshman from Carrollton, Texas fell to 5-4 on the season but looks promising in his first season.

“DeVaughn is looking good, he just has to commit to everything that he does. He is looking better as a freshman,” Mize said.

The Storm now sit at 1-3 on the season, 0-1 in Iowa Conference play, falling to two straight ranked opponents. They’ll likely have some more stiff competition when they head to Storm Lake for the Buena Vista Invitational at 9 a.m. on Saturday.