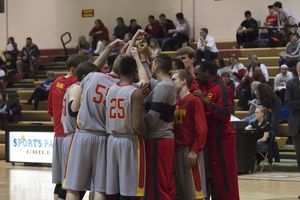 STORM LAKE – Both the Simpson men’s and women’s basketball teams suffered 12-point losses at the hands of Buena Vista on Wednesday in the Iowa Conference opener, as they fell to identical 7-5, 0-1 records.

Simpson led 14-13 after the first quarter, but Buena Vista won the next three quarters to take the conference opener.

The Beavers (7-5, 1-0) outscored Simpson 20-13 in the second quarter to take a 33-27 lead at the break, a lead they would never relinquish. There were eight lead changes in the game, although all came early in the contest.

Buena Vista only outrebounded Simpson 45-42 but they managed to outscore the Storm 17-5 in second chance points.

Center Jasmine Flynn-Graves was part of that difference down low, posting a 16 point and 10 rebound double-double for the Beavers. She was joined by Becca Pennington who scored a game-high 18 points.

Maddie Bosworth had 11 points and Mackenzie Haupt had 10 in the loss.

Sam Amsbaugh’s career-best 27 point and eight rebound double-double was the silver-lining in a loss to the defending Iowa Conference champs.

The 6 foot 5 inch senior now has seven games in double-figures and his third game with at least 23 points.

There were three-lead changes early but it was Buena Vista’s game throughout.

Thanks to Amsbaugh, Simpson outscored the Beavers (6-6, 1-0) by a staggering 38-7 advantage in points off the bench.

Buena Vista’s Nick Clark helped counteract that margin with 35 points on 8 of 14 shooting from three. Forward Kennedy Drey had 22 points behind Clark.

Austin Turner had 15 points but just two assists as the Beavers dished out 23 assists to only 10 for Simpson.

Simpson goes to Cedar Rapids to take on Coe this Saturday. The women tip-off at 2 p.m. followed by the men at 4 p.m.