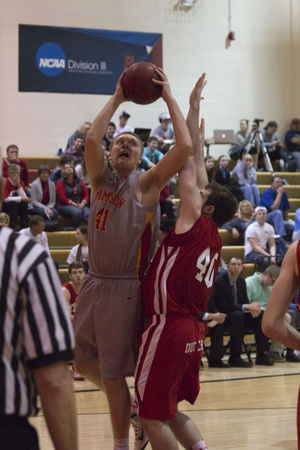 Five-time NBA champion Tim Duncan is the epitome of the workman-like winner. His best move is the bank shot in the low post and Sports Complex rated him the most boring athlete of all-time.

Sophomore basketball player Sam Amsbaugh doesn’t mind that moniker for his favorite NBA player of all-time. And if he had his way, he would play just like Duncan.

The scary thing is, there are some similarities.

“I’d say Tim Duncan [is my favorite player],” Amsbaugh said. “I have always loved the Spurs and I love the way they play. I guess he plays the same way as me because now he’s old and I’ve never been the most athletic guy or the tallest guy.”

At 6 foot 5 and 215 pounds, Amsbaugh doesn’t pass the eye test as the prototypical post player. Instead he has to be technical and smart in the post, and sometimes you scratch your head how he gets the job done. But he does.

“He is crafty in getting the ball up to the rim,” head coach Brad Bjorkgren said. “He’s good at getting guys to go up and draw fouls.”

The old-school 3-point play is Amsbaugh’s forte, and he showed that as a freshman. It’s a play that requires patience and body control under duress, and although it’s not flashy, it’s perfect for his identity.

“I think patience is one big thing in my game,” Amsbaugh said. “I just take what they give me and keep my eyes on the basket.”

It’s a veteran playing style for just a second-year college player, although he utilized it last season as he averaged 5.3 points per game, appearing in 24 games while starting six – more playing time than any other freshman.

This season the West Fork High School graduate has elevated his game to another level, and if it continues it might mean all-IIAC honors.

With 14.2 PPG, Amsbaugh leads the team in scoring thanks to three game with at least 23 points and 10 games in double-figures in scoring.

Despite being an undersized post, Amsbaugh is second on the team in rebounding with 5.3 per game, including 11 rebounds in a double-double against Grinnell in November.

As a freshman Amsbaugh shot just eight 3-pointers although this season he has already made eight, going 4 of 5 from deep in a career-high 27-point outburst against Buena Vista on Jan. 6.

“I just wanted to expand my game,” Amsbaugh said. “In high school I played more in the post, although I’ve always been able to shoot them.”

Bjorkgren’s offense is also giving players more freedom to shoot, which is part of the addition in Amsbaugh’s game. The Storm have averaged 24.1 3-point attempts per contest, making 8.6 each game during their 7-5, 0-1 start.

“Yep [our new style] gives me more freedom as a post because some coaches see posts as on the block, only shooting three-foot shots,” Amsbaugh said.

Amsbaugh will need to continue developing his “substance opposed to style”, Duncan-like game as the season phases into the thick of conference play.

Teams will see the sophomore twice a year, and while pump fakes will be needed against taller post players, Amsbaugh hopes to improve what he’s been lacking since freshman year of high school.

“[I need to improve] strength and athleticism,” Amsbaugh said. “Obviously, neither one of those two are my strong points and those are pretty important as a post player. Those have been my weakness since freshman year of high school.”

Test number one was a success for Amsbaugh as he put up 27 points and eight rebounds despite losing to Buena Vista. Coe is next up when the Storm head to Cedar Rapids for a 4 p.m. tip on Saturday.