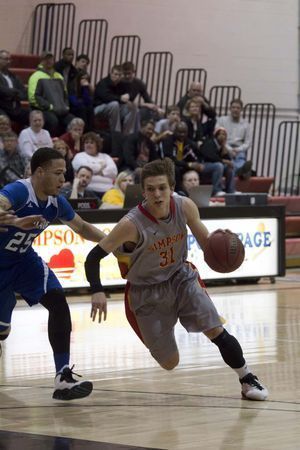 All four winter sports were in action this weekend, some at home in Indianola and others dispersed around the rest of Iowa. Here’s a brief synopsis of what you may have missed.

INDIANOLA – The Storm (11-6, 4-2 IIAC) dialed up from long distance for 13 3-pointers as they trounced one of the Iowa Conference cellar dwellers in Luther, 76-59 at Cowles Fieldhouse.

Simpson and winning the battle of the boards aren’t typically associated, but they were on Saturday as Simpson outrebounded the Norse (3-14, 2-4 IIAC) 41-28.

The Storm are already five wins better than they were last year, and there are still eight regular season games to go.

INDIANOLA – Down 34-28 at the half, Simpson was well within reach of the IIAC-leading Norse. But a 31.7 percent shooting performance after the intermission cost Simpson its first home loss of the season as it fell 70-52.

Consistency and balanced play have been Luther’s keys to success this year and they were able to rely on that again. Four players scored in double-figures for the Norse (13-4, 5-1), led by Taylor Jenks who scored 20 points.

Simpson did lead by as many as five, but the Norse posted a 21-point advantage at one point, scoring 24 points off turnovers while out rebounding Simpson 48-33.

Both the men and women go to Central on Wednesday to face the Dutch. The women tip-off at 6 p.m, the men shortly after that.

GRINNELL – The Simpson women placed 11th/13 at the Grinnell Invitational while the men placed last out of an eight-team field on Saturday.

Host Grinnell, a powerhouse in Division III swimming, won the the men’s competition while the women finished 3rd, behind just Gustavus Adolphus and the University of Nebraska-Omaha.

MT. VERNON – The men and women competed in their second indoor competition of the season on Saturday in Mt. Vernon.

The women placed 4th/6, finishing with 64 points, good enough to beat Coe and Southwestern Community College. Sadie Timms posted the best performance for the women, finishing 1st/13 in the 3000-meter run with a time of 11:00.19.

Sprinter Travis Tupper won the 60-meter dash in 7.18, while long-distance runner Ian McKenzie won the men’s version of the 3000-meter, crossing the finish in 9:06.19.

CEDAR RAPIDS – Simpson went 0-3 at the Iowa Conference duals on Saturday, with two of the losses coming to No. 12 Luther and No. 14 Coe.

Colby Vlieger was the only Storm wrestler to finish above .500, going 2-1 on the day at 285. Jason Kiehne, Brett Roberts and RJ Brown earned Simpson’s only other wins.

Storm wrestling continues at the Duhawk Open in Dubuque this Saturday.