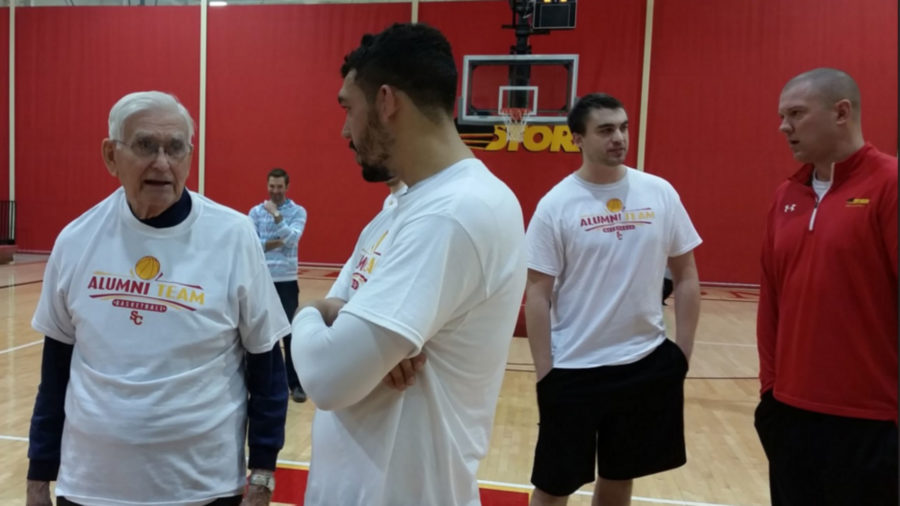 JV men’s basketball played against a team of alumni, ranging from guys in their 40s to recent Simpson graduates.

Though the alumni had a flashier style of play, they lacked the chemistry to orchestrate a win. Simpson JV won 95-82.

“It’s really fun. It’s good networking,” said Austin Hennings, class of ’14. “You get to meet people and see a lot of guys you’ve lost touch with.” Hennings was back for his first time since graduation.

Fifteen alumni played and rotated in squads of five.

Everyone got equal time, which made it look like they were just there to have a good time.

Hullema played small and power forward in his two years as a Simpson basketball player.

Hullema said being back on the court made him feel old.

“Being the second oldest guy today kind of puts things in perspective,” he said.

The older alumni held their own when they were on the court. They were the starting five, then were replaced by younger and younger players.

The group of five, consisting of Hennings, Eric Lande and three others of similar ages, brought them within four points of the JV squad, but their momentum was lost when they were subbed out.

One notable guest was Chuck Kerr, class of 1953, who played center for Simpson in the 50s.

“I had one year where I averaged 17 or 17 plus points. I got recalled to Korea in the middle of my years,” Kerr said He was a member of the U.S. Navy before he came to Simpson. He said he played basketball in the Navy, and one of his buddies told Kerr he had to go to Simpson and play basketball with him.

Kerr did not play in the alumni game, but he wore the same shirt as the rest of the team and was included in their picture.