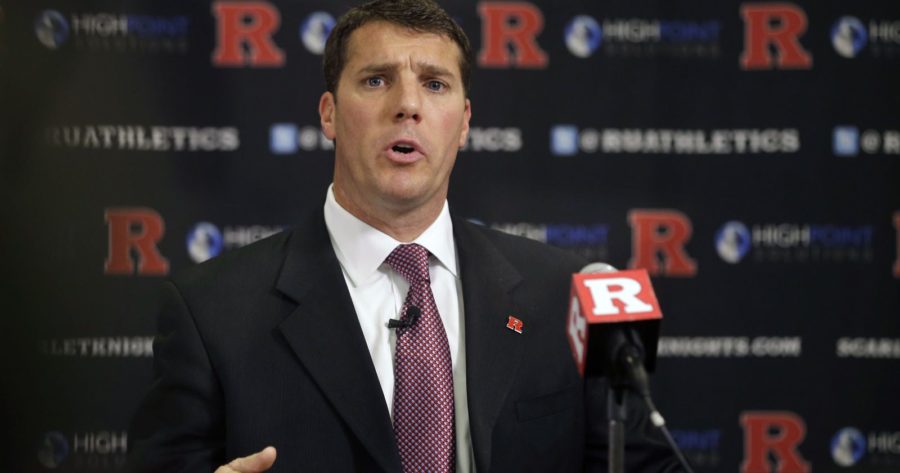 University of Iowa fans will be rooting against Jay Niemann on Oct. 29, an ex-Simpson football head coach, as the Hawkeyes play Rutgers University in New Brunswick, New Jersey.

Niemann, who was the Storm’s head coach from 2002-2007, was hired as the defensive coordinator at Rutgers University on Dec. 30, adding another stop to an impressive coaching resume.

The Avoca, Iowa, native who graduated from high school with a class of 48 students, has coached at eight different colleges after playing football at Iowa State University from 1979 to 1982.

His first college coaching job came at Western Washington University in 1985 as the linebackers and special teams coach. Coming out of ISU, Niemann didn’t know if college coaching was right for him.

“When I left college, I wasn’t sure that I wanted to be a college coach,” Niemann said. “My degree plan had me starting out as a high school coach.”

One year later, Niemann found himself coaching in the then-Pac-10, landing a graduate assistant position at Washington University in 1986.

“In this business, you just don’t know where you will end up,” Niemann said. “So many opportunities revolve around key breaks. It’s more about working with good people.”

The Iowa native would soon return home, coaching at Drake for eight seasons, leading the University of Northern Iowa to an NCAA Division I FCS semi-final appearance before coming to the sidelines of Bill Buxton Stadium.

In his second year at Simpson, Niemann led the Storm to their last NCAA playoff after going 9-2 behind a defense that only allowed 16.3 ppg and a quarterback, Mike Donnenworth, who threw for 3,461 yards and 32 touchdowns.

“I will also remember having the opportunity to take the team to the playoffs,” Niemann said. “I look back on a lot of great memories, and I still keep in touch with a lot of people (from Simpson).”

James Hoffman, who played under Niemann from 2002-05 as a defensive back, coached alongside Niemann and is currently in his ninth season of the coaching staff at Simpson.

Hoffman reflected why he went to Simpson and got into coaching, all thanks to Niemann.

“(Coaching) is something that I wanted to do from the get go,” Hoffman said. “I wanted to play for a guy that had coached at a really high level, and just a few days after Niemann had been hired I came on a visit here. I started coaching track (at Roosevelt High School) when I was in college here and I think he understood my passion for it and after I graduated he reached out and contacted me about coaching here. I give a lot of credit to him for starting my coaching career.”

The Storm were 32-29 in Niemann’s five seasons in Indianola, but regardless of the team’s overall record, Simpson always had stingy defenses.

“My first two years here I was a quarterback, but when I switched to defensive back it became apparent how knowledgeable of the game he was,” Simpson College Athletics Communication Director and alumnus Bryan Geelan said. “I would find it hard to believe that there were too many more Division III coaches that knew as much about defensive schemes as him.”

Niemann wasn’t afraid of telling his players when they got his schemes wrong in film sessions.

“We were looking at film one time and he said to one of our best linebackers, ’Eric, you couldn’t have been anymore wrong than you were on that play’,” Geelan said. “And that’s our starting linebacker and is up there on the all-time list in tackles.”

Niemann coached with a regimented and analytical style, expecting a lot out of his players and embodying the discipline and hard work of a small-town Iowa native.

“I think he went out at lunchtime and ran about two miles a day before coming back,” Geelan said. “At the time he was here he was in pretty good shape and he could have went out there and probably competed with some of the players.”

Niemann made a coast-to-coast journey when his airplane landed in Piscataway, New Jersey, a few weeks ago, an entirely new landscape and journey, but one made possible by a supporting family.

“I think that (my family) has handled it as well as they can, as change is almost inevitable in coaching,” Niemann said. “I’ve turned down jobs because we didn’t feel it was the right thing. But with both of my sons in college, it felt like a right fit.”

In Niemann’s final year in Indianola in 2007 Simpson went 4-6, but he leaves a legacy that transcends his career record as a head coach.

“Simpson hires top-level people who know what they’re doing,” Hoffman said. “Sometime it doesn’t always work out record wise. There are a lot of other things that go into someone’s record but it definitely doesn’t define who they’re as a coach. Obviously his career was a great example of that.”