“It’s On Us” to bring about change 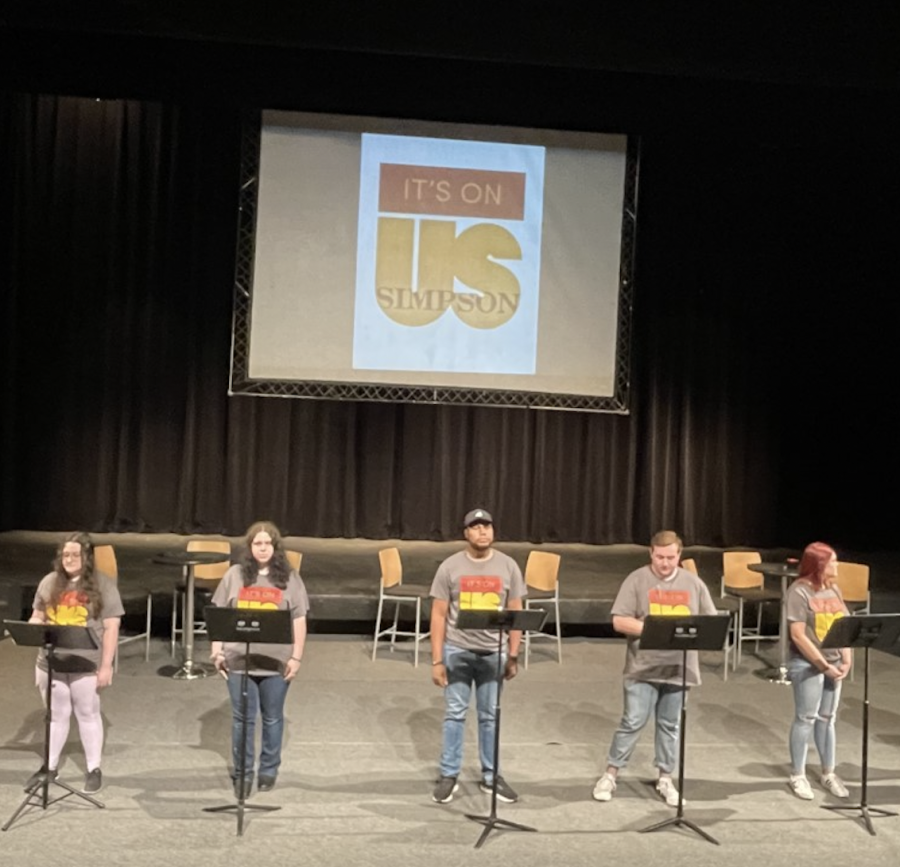 Agents of change performing It’s On Us, 2022

Sexual assault on college campuses is an epidemic we face as college students on a daily basis, as are hate crimes based upon someone’s sexual orientation, gender identity or sex. These issues are a stark reality for college students across the nation.

The first step to solving a problem is admitting there is an issue, and that is exactly what “It’s On Us” has provided to first-year students for the past seven years.

Before “It’s On Us”, the school brought in an off-campus group to perform a similar program, “He said, She said.” There was a heavy heteronormative focus in this program, which prompted the switch to “It’s On Us” in 2015.

Jennifer Nostrala, professor of theatre arts and director of Simpson productions, took on the project after the switch from “He said, She said.”

“I thought that the best way to create the program would be to engage students in the development through a May Term course,” Nostrala said. “They studied the issues of sexual harassment and assault on college campuses, did MVP training, met with various constituent groups on campus, and then I worked with them on developing the first script.”

This was initially introduced as a May Term class, Agents of Change, in 2015. This class has not been available to students since before the COVID-19 pandemic in 2019 due to a lack of enrollment.

While the class has taken a pause, the performance itself has not. In 2020, at the height of the pandemic, there was an online performance. In 2021, the agents of change again performed in person, as did they this year.

The agents of change tackle issues of peer pressure, consent, hate crimes, sexual assault and more that happen on college campuses across the nation, and that first-year students may experience during their time in college.

While these issues are incredibly common on college campuses, it is important to note that not every college sheds much light on these issues.

“It started with an online training assessment and then we all had to join a zoom call and have a presentation over the topic where they never really said ‘sex’ or ‘sexual violence,’” Landtiser said. “They referred to it as ‘going kayaking,’ and the whole thing just felt so off.”

Senior Tanner Striegel has performed in the presentation numerous times, noting how important it is to bring awareness to such issues.

“I think it starts a conversation on our campus that needs to be had. I think it brings light to subject matter that can sometimes get swept under the rug,” Striegel said. “And while we don’t want people to feel nervous with their time at college, it’s good to address it right away and be like, ‘Hey, this is something that happens, so just keep an eye out for it.’”

Seeing a live performance is much more immersive and beneficial than a static performance online, online training, or even a second-party performance, like “He said, She said”.

Nostrala noticed how much more beneficial a live performance by Simpson students was than previous attempts to present these issues.

“It’s On Us” strives to bring awareness to issues that plague college campuses and impact the lives of students.

It’s on us, as a community, to make sure students know that they aren’t alone in any of these situations and that they have resources on campus to ensure their wellbeing.