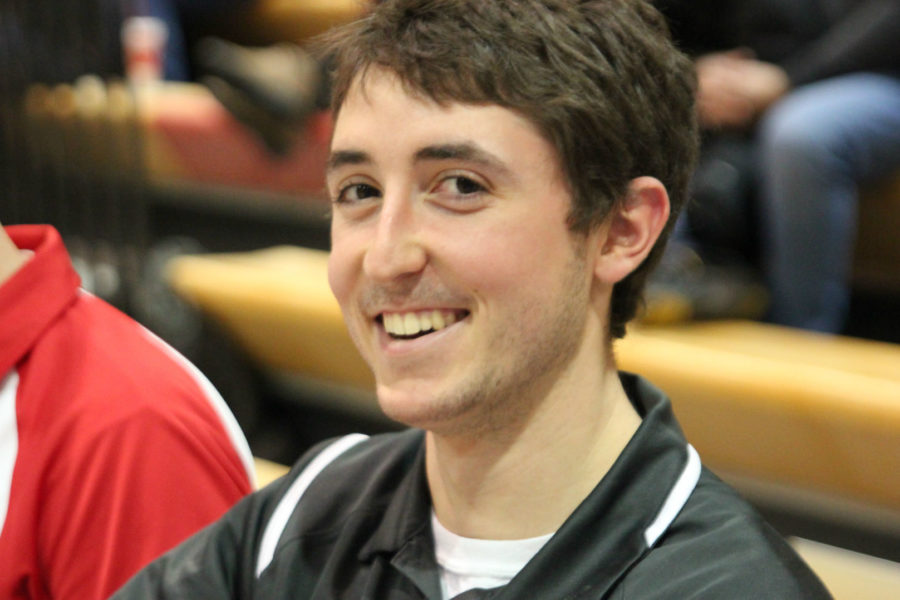 But unlike most college seniors awaiting graduation, he isn’t fearful of the future.

“I am just an intrinsically driven person,” Borgeson said. “I like to create as much security as I can going on forward. But at the heart of it all, I know what I like. I love sports. I love covering sports. I love informing people, talking to people, communicating. I think that gives me direction.”

This year, the Naperville, Illinois, native has already applied to 12 graduate schools, trying to receive graduate assistantships throughout the nation.

He’s a media relations intern at the Iowa Energy; he’s a freelance sports writer for the Indianola Record-Herald; he’s the sports editor at The Simpsonian; he’s the sports information undergraduate assistant in the athletics communications department at Simpson; and he’s a pitcher for the Storm baseball team.

The ultimate gig, he said, is a media relations role at a professional sports team.

“It’s just about sacrificing things sometimes. You wish you could spend more time doing this, or doing that, working out or playing baseball, but it doesn’t always work out that way. And that’s OK,” Borgeson said.

At a critical transition period – graduation to the work force or graduate school – Borgeson said he appreciates the little free time he has.

“At the start of the day, it’s knowing you make your own schedule,” he said. “This is when I get things done and knowing I need to maximize my time. It’s like free blocks of window become a great gift.”

Borgeson said he isn’t the paragon of a student athlete career-focused professional parents hope for their children.

Going into college, Borgeson knew he wanted to study journalism and play baseball.

But during winter break his freshman year, he started to lose motivation and was second-guessing Simpson’s place for him.

“I didn’t really like Indianola,” he recalled. “I didn’t like Iowa. Everybody was from Iowa. I felt it was very (isolated) and it was kind of in a bubble. I was going to go to Bradley University in Illinois and be a sports communication major. It’s one of the few programs that offer that specific degree in sports as an undergrad program. I was also considering DePaul, Butler, Marquette, schools like that. Not huge schools, but bigger than Simpson.”

What made him stay in the middle of Iowa?

“I realized the relationships kept me here,” Borgeson said. “I stuck it out here, and I give that a lot to my connection with baseball at the time. And Coach Joe Blake, who ended up passing away, I just wanted to stay here because of those relationships.”

“I wouldn’t trade the guys I met on the baseball team,” he added.

“You don’t realize it, but the people here are your professors, your coaches. Part of their jobs it to set you up for the future,” he said. “I have to thank my parents, thank God and thank friends. Without that support, every day can become mundane.”

Borgeson, who wasn’t considered a starting pitcher until this year, threw 187 pitches in an 11-inning game – a feat he’s proud of accomplishing. He received an honorable mention for the IIAC Pitcher of the Week award following the May 1 win over the University of Dubuque.

“It’s not like I pitched some stellar game statistically, but it was just a testament that I can work hard and do something that other people mentally won’t do,” Borgeson said. “I never pitched more than two and two-thirds of an inning, and then all of a sudden, I pitch 11 innings.”

His love for sports seamlessly transitioned into his professional work.

Through his internship with the Iowa Cubs, he had over 800 hours of experience throughout this past summer, meeting top-notch people from ESPN’s magazine, “Vine Line,” The Des Moines Register and others.

The 5-foot-11-inch pitcher said he originally chose Simpson because of his special connection with baseball.

“I (sought) out Simpson because they had a smaller roster than a lot of the other Division III schools, so I thought maybe I’ll have a chance to play.”

The challenge, Borgeson said, is finding a healthful balance between academics and athletics.

“My goal is to make sure I get better. If I know I worked hard at the end of the day, that’s my accomplishment. That’s what I’m most proud of, and I don’t think I wasted any time,” he said.

Self-described as “Gucci,” Borgeson finds himself in no rush and in no panic to graduate. As he reflected on his college career, he said, “I think for me, it comes down to every day just keeping it simple and knowing this is a great time for you where opportunities are everywhere.”