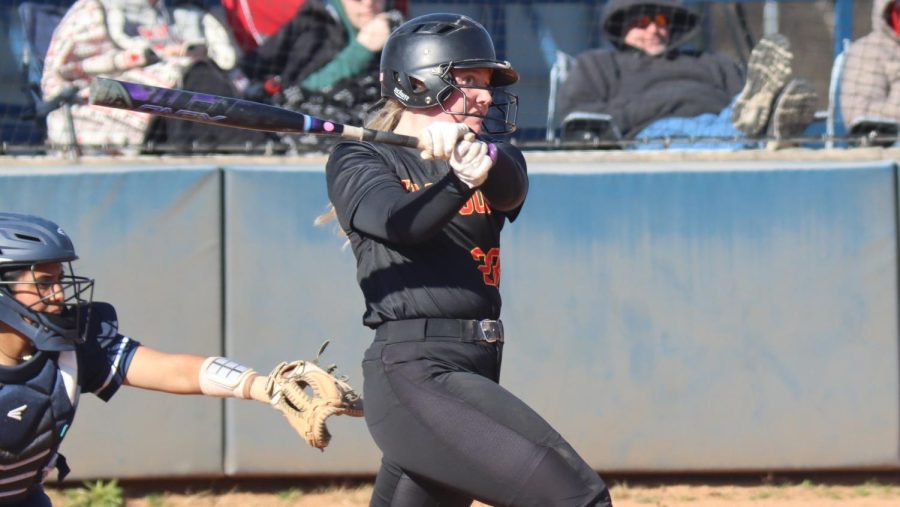 Senior softball player Megan Crockett reached the milestone of 100 career hits at Simpson during a game against Monmouth College on March 27. Softball head coach Brent Matthias attributes this to the work she puts in during practice, as well as what she does behind the scenes.

“She’s hitting extra. She’s doing a lot of things by herself above and beyond practice to make herself better,” he said. “People really take it to that next level as they’re working and doing extra and Megan really has done that in her past years here at Simpson.”

Crockett also said she thinks the work she puts in outside of practice helped her reach this accomplishment.

“I’m one of those that likes to work in silence and go hit on my own, so a lot of tee work and front toss with some girls on the team,” she said.

Crockett also does work in the off-season that allows her to fix things when needed.

“Every year I change little tweaks in my swing when we find weaknesses,” she said.

Even with others acknowledging this huge accomplishment for her, Matthias believes her humbleness prevents her from seeing it for what it is.

Crockett said she didn’t even know she was approaching this milestone. She found out that she got her hundredth hit on Twitter after the game. This is partly because hits aren’t what she strives for.

“My biggest focuses are average and on-base percentage. I don’t think about my hits adding up,” she said. “I just go out there and play the game of softball.”

Crocket said she attributes part of her success to the team.

“They keep me humbled but also strive to be better. I’m super competitive and when they get competitive back it pushes me even more,” Crockett said.

Matthias said he also believes the competitiveness of the team has helped Crockett.

“Everybody wants to win and that’s that competitive drive that Megan has, that she really feeds off of,” he said. “We have a mantra on the team: win at everything.”

Matthias says he thinks that Crockett’s accomplishment will help motivate the team. With their competitiveness, he doesn’t see this being a problem.

“I always say that sometimes leading is you have to lead by example, and when your teammates can see you doing something really well, that makes them want to do that as well,” he said.

Crockett says she is hoping that this will show the team, especially the younger girls, that anything is possible if the work is put in.

“I think I’m one that has shown to do the extra work and my success wasn’t just handed to me. So I tried to start with the younger ones and push them to do better,” she said.

Matthias says he thinks highly of her among players in the American Rivers Conference.

“She didn’t just wake up one morning and decide she was going to be good,” he said. “Her craft is hitting, and she’s one of the best in the conference.”