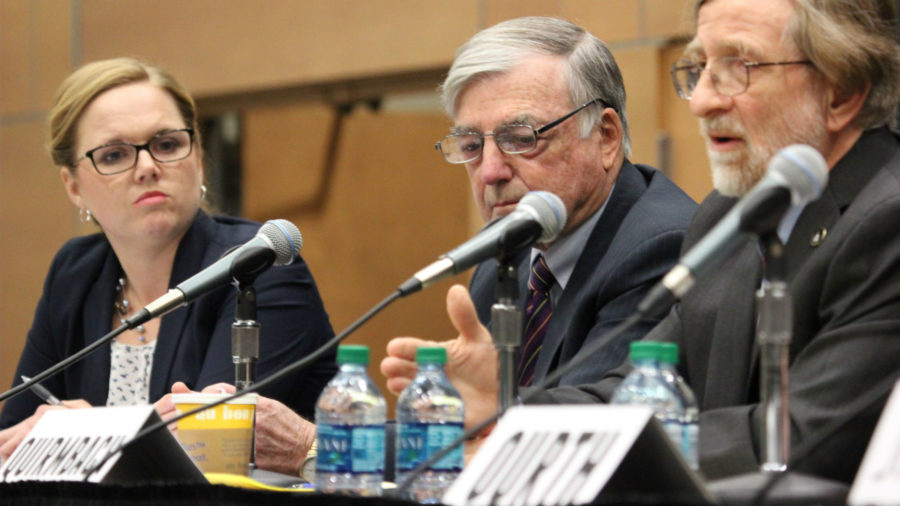 State Senators and House Representatives descended upon Simpson College on last week to discuss budgeting for K-12 education in Iowa.

Many issues were discussed such as budget growth, third-grade retention and the Teacher Leadership Program.

Moderated by Mackenzie Ryan, the first half of the forum consisted of state representatives Ron Jorgensen, Scott Ourth, and state senators Herman Quirmbach and Julian Garrett.

“Education funding has been increased by $300 million dollars,” Garrett said on the subject of school funding. Although this increase seems substantial, Ourth peeled the rose-colored lenses from this statement.

“In the last five years, supplemental aid has been the lowest, percentagewise, in the history of public education in Iowa. We can do a lot better,” Ourth said. “For me, our kids are the most important thing, and I’m not going to let you down.”

Putting more money into education, however, would mean spending in other areas would have to be cut.

Garrett pointed out the school systems are not only using their ongoing revenue but their available revenue.

Garrett and Jorgensen do not want to budget an excessive amount of money toward education because it would lead to cuts in areas such as police funding, infrastructure and prison systems.

Ourth holds the belief that education should be top priority when it comes to budgeting.

“An investment in our youth, beginning with early childhood education, is an investment that’s going to pay in spades,” Ourth said. “Kids aren’t going to go to prison, you’re not going to go on health care roles, you’ll raise kids that will be well educated, and it will perpetuate itself.”

The second half of the forum held a panel of educators and administrators.

The panel consisted of Tom Narak, government relations director of the School Administrators of Iowa, Art Sathoff, superintendent of the Indianola Community Schools, and Dan Carver, a teacher in the Carlisle Community School District.

The main issues discussed amongst the group were how to properly develop a learning assessment and the Teacher Leadership and Compensation Program.

The last 15 minutes for both panels were dedicated to questions from audience members. Many concerns were brought to light regarding how compromises could be made in order to progress the budgeting issues forward.

“There are obviously two deeply divided schools of thought on how education should be funded,” Ourth said. “You’re probably not going to change their minds, and that’s why elections matter. You don’t have to change people’s minds, you just have to make sure that the proper people get elected.”