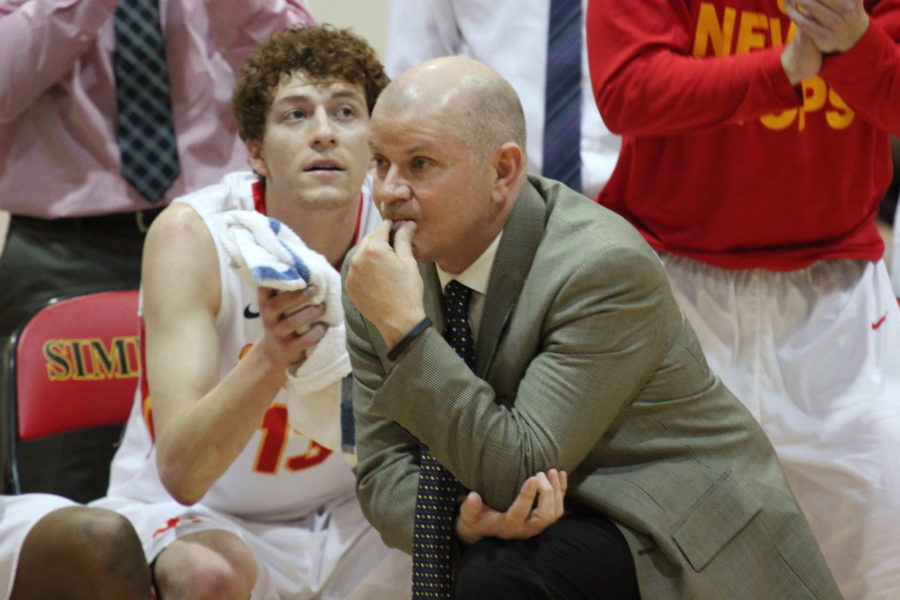 DUBUQUE, Iowa – The Storm fought tooth and nail, but in the end, the Duhawks were one move better.

The Simpson (15-10, 8-6) men’s basketball team dropped a crucial matchup against Loras (13-12, 8-6) in their regular season finale Saturday, 89-87, a game that has major Iowa Conference Tournament ramifications. Simpson had one last chance to tie or take the lead trying a lob to the rim as time expired, but the pass was sent away by multiple Loras defenders.

The first half saw hot shooting from both sides and a see-saw, back and forth battle that gave way to seven lead changes. The first eight minutes of the half was as even as a basketball game can get, with both teams knocking down shots at a high clip. A layup by Sabonis Smith at the 10:47 mark triggered a mini, one minute run by the Storm that gave them a six-point lead, their largest lead of the half. Loras would fight back, however, and take the lead with three minutes left. After trading buckets on three straight possessions, Smith gave the Storm a 42-40 lead at the half with an ankle-breaking step back three-pointer.

Loras came roaring back in the second half, going on an almost 11 minute run that gave Loras a 13 point lead with nine minutes to go, led by Demond George’s 11 points. The Storm would not go away, going on their own prolonged run, eventually grabbing a 79-77 lead with 5:18 remaining after a DJ Dafney layup, Dillon Gretzky steal and Cody Good trey. After four minutes of back and forth basketball, the Storm pulled out an 87-85 lead after a Sam Amsbaugh layup with 1:30 left. Mirko Grcic and Danny Quinn put together back to back layups to give the Duhawks an 89-87 lead with 28 seconds left, proving to be the game winner.

Amsbaugh led the way for the Storm, finishing with a double-double, pouring in 25 points on 9-16 shooting to go along with 10 rebounds. Smith and Dillon Gretzky had 14 points and Turner dished out four assists to pace the Storm.

Grcic led all scorers with 26 points and George finished with 14 points on an efficient 5-9 from the field.

Simpson drops to the three seed in next weeks IIAC Tournament, after Wartburg defeated Luther and Dubuque handled Central. It will host Buena Vista on Tuesday.