Where’d you get dem kicks? 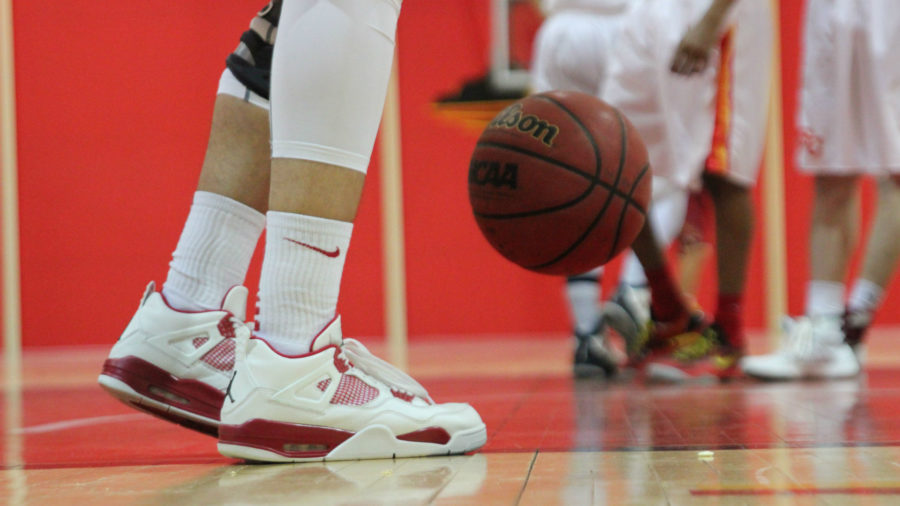 Men’s basketball shoes take up 22 pages on Eastbay.com, with 60 shoes per page. It’s up to the player to determine which pair they wear.

Senior guard Tyler Anderson said he chooses his shoes based on the feel.

“I’m a Nike guy, I like Nike, but I’ll hoop in anything that feels good,” Anderson said.

Style is also important when picking shoes. Anderson used to wear a pair of customized Kobe 10s, the signature shoes of Kobe Bryant, but after his injury this season, decided to switch to Jordans and see if it would change his luck.

His shoes are not normal Jordans, either. They are Retro 4 alternates. This was a color way of the sneakers Michael Jordan wore during the 1989 season.

Anderson said the Jordans weigh a little more than modern sneakers, but otherwise feel the same once broken in.

Smith and Anderson both said their all-time favorite shoes to play in were Kobes. Smith reminisced back to 2006 and the high top Kobe 1s, while Anderson said the Kobe 9 lows were his favorites.

Smith has three pairs of game shoes. He has Kyrie Irving 1s and Lebron 12 lows in red. He said of the two he likes to play in the Kyries more. He also has a pair of Kevin Durant 8s with a mint greenish blue color on the bottom. He wore the KDs only around Christmas.

Smith also has practice shoes and wants to wear two pairs of his retro Jordans in games. He said he will wait until he is a junior or senior to get them out, though. He considers his retros his babies and wants to keep them in good shape.