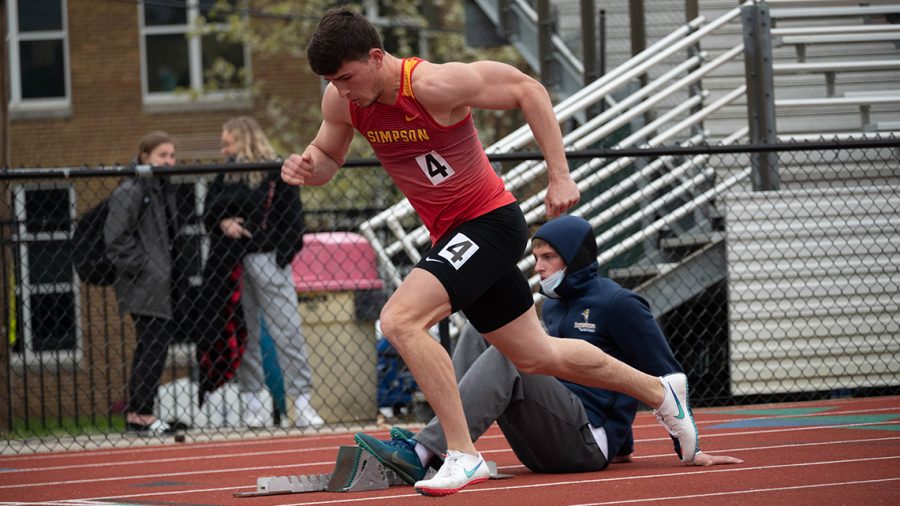 The Simpson men and women’s track team are expected to start their indoor seasons in December.

The upcoming Simpson College men and women’s indoor track and field season will look a little different than last. The Storm will open the season in December rather than February.

Scheduling is not the only difference this year, the Storm will also have a new Head Coach, Aaron Fuller. Fuller and director of track and field coach Heath Moneck will pair together to lead the teams.

Last season the men’s track and field team placed seventh in the American Rivers Conference Championship meet and the women’s team finished eighth. Due to the cancellation of NCAA Winter Championships, the meet was replaced with the NCAA Division III Elite Indoor Championships where some of the top performances of the year occurred.

Some notable finishes include:

This year, both teams look to take a step forward with an added year under their belt and new energy in the air.

Coach Fuller said he hopes to take his past experiences and use them to create a positive practice environment.

“Every school I’ve been in has probably had a little bit of something that I’ll take from it,” Fuller said. “I really want to try to build a program where athletes come to practice every day and are very excited, fired up and ready to go.”

A key to this season will be building relationships so that the team is unified as one.

“I want to start with building great team chemistry and having our athletes build up relationships,” Fuller said. “Once we have that in place, that really allows us to help athletes develop in terms of their performance and by the time the conference meet rolls around, I hope that will allow us to be competitive.”

Practicing on an outdoor track, then transitioning to an indoor track can provide some challenges but the mindset stays the same.

“There’s a little bit of a difference [in curves and distance], but it’s still track and field,” Fuller said. “The competition part of it stays the same; let’s go out and try to beat somebody.”

Coach Fuller is looking forward to the start of a, hopefully, fun indoor track season.

“Right now I’m most looking forward to a meet in December at Central because it’s the first one, so that will be exciting,” Fuller said. “They also run a few events that we don’t normally see very often like the 300 meter dash, but that’s something that early on in the year you kind of get to do for fun.”

Senior sprinter and jumper Carter Berkey talked about how the team is small in numbers but because they are such a closely knit group, it allows them to truly push each other to get better.

“We’re a small team but we have a lot of people that are able to compete at a high level,” Berkey said. Hopefully we’re gonna have a couple people make nationals and be all-conference; we’ve grown a lot since last year.”

Sophomore standout hurdler Audrey Arnold highlights team chemistry as one of her favorite parts of track and says there’s something different about this team compared to years past.

“My favorite part about track is getting to spend time with the team,” Arnold said. “We make a big effort as a team to get close and build relationships with each other, which helps make practice and meets more enjoyable.”

With a lot of familiar faces returning, an extra off-season to practice and a new coach leading the way, the Storm are setting their expectations high this indoor season.

Simpson will begin the season at Pella for the Central Holiday Preview on Dec.11.