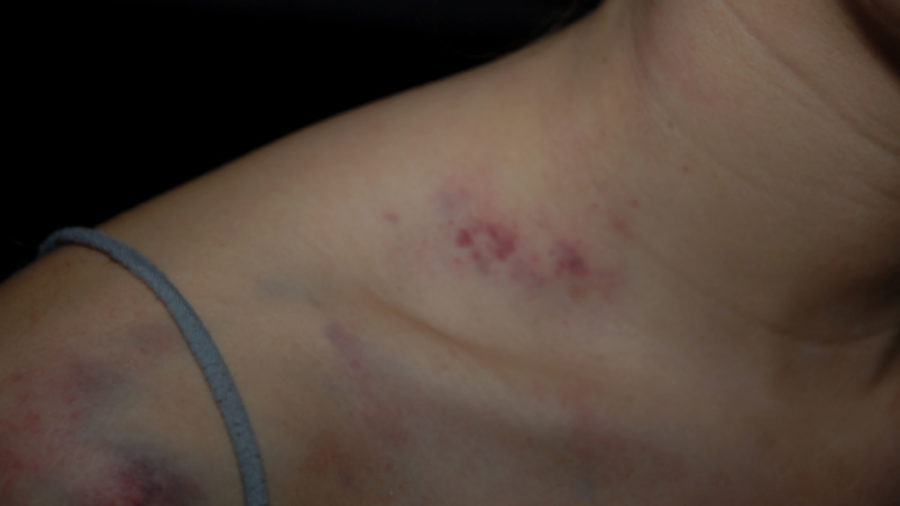 by Tiffany Allison, Special to The Simpsonian

Felony assault, domestic assault with a weapon, false imprisonment, beaten, hit about the head and body, beaten with hands, knees and feet, urinated on, beaten with a wrought-iron cross, refused to let leave or use the telephone, numerous injuries, numerous bite marks about her body, lost consciousness, escaped.

These were all things written about me, in an article from The Des Moines Register in September 2009. Lucky to be alive should have been included.

I knew domestic violence existed. I had seen it on television, heard about it from my mom, a police officer who is called to “domestics” almost daily at her job, and my best friend had encountered stalking in a relationship with a boyfriend she had in her mid-20s.

I used to believe domestic violence was something that happened to other people – not to me.

I was strong, independent and smart. Too smart to get involved with someone who would physically abuse me.

If, by chance, someone did ever place their hands on me, well, they would be sorry.

I had always lacked fear – of anything really. My grandfather had always said to me when I was young, “Girl, someday you’re really going to get hurt, because you’re not afraid of nothing.” Then he would point out, “That isn’t a good thing.”

In late February 2009 while shopping at Wal-Mart, I was approached by a handsome stranger. He questioned if I had change for the soda machine outside. We began chatting and eventually he asked to exchange numbers.

Before I met him, I had always thought positively of people in general and lived by the philosophy of Anne Frank that humans are basically good. I believed that people could change.

People would do good works if given the opportunity and in the basic goodness and integrity of humankind.

I’m not sure if this is because of things I was taught as a child at school or church, from my family or if it’s just my nature.

It quite possibly might even have been just a fantasy of mine, a prosperous world of good Samaritans and charity workers, which I had held onto from childhood naivety.

Over the course of the first month of dating, I became aware that the handsome stranger had previously fallen on hard times and as a result of bad decision making had been incarcerated.

There were previous incidents of assault, burglary and probation violations lurking in his past. He always contended that he was moving forward, making good decisions. I felt that was possible, and I wanted to help him succeed. I wanted to make the remainder of his life positive and happy, especially since the earlier parts were so dark and full of torment.

My family, my mother in particular, became increasingly alarmed and worried as she found out about his past. I shirked her pleas to stop seeing him and stood firm that he would never harm me and was making positive decisions in his life now.

There were red flags along the way that his progress was not what he wanted to make it seem, and I ignored them all.

Then one day, his birthday, after a wonderful dinner celebration with friends: felony assault, domestic assault with a weapon, false imprisonment, beaten, hit about the head and body, beaten with hands, knees and feet, urinated on, beaten with a wrought-iron cross, refused to let leave or use the telephone, numerous injuries, numerous bite marks about her body, lost consciousness, escaped.

*Tiffany Allison is still working to push her bill that would lengthen the amount of jail time served by repeat domestic abusers.