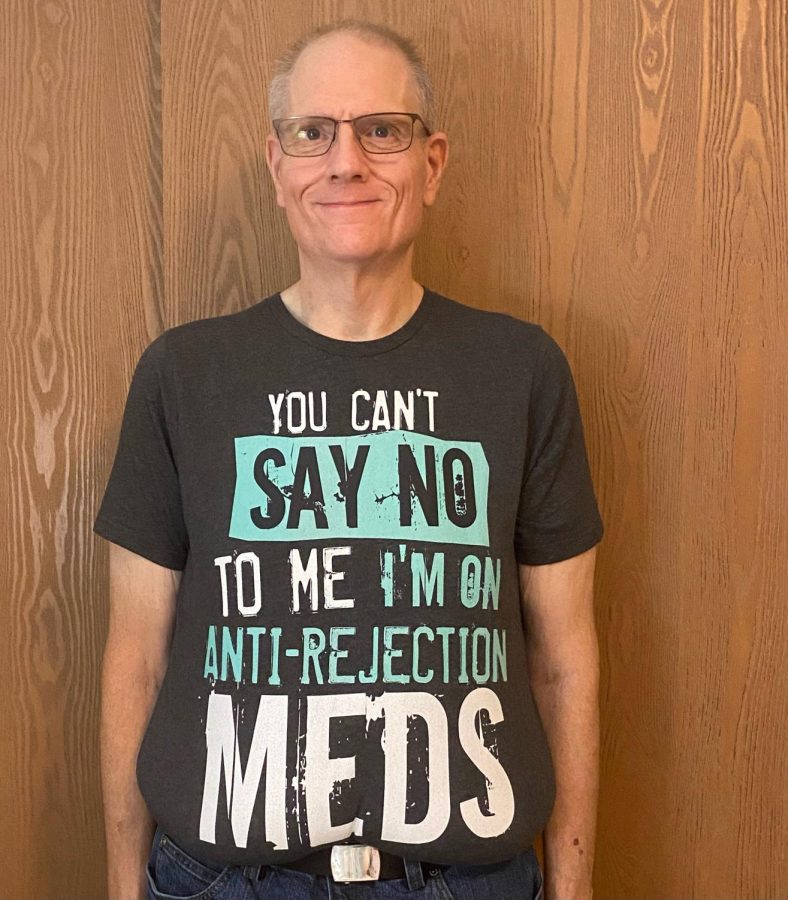 Johnson was activated on the transplant list on Sept. 23, 2021, and was called for transplant only ten days later on Oct. 2.

Johnson was in the hospital for six of the 26 days he spent in Rochester.

Currently, Johnson is recovering very well but knows that the largest chances of transplant issues are within the first year.

Johnson’s story began in Jan. 2018 when he went to the doctor for an overdue physical.

“The doctor said that everything looked good, but he wanted me to cut back on sweets and pastries, as my blood sugar was higher than what they liked to see but not diabetic,” he said.

Johnson decided to talk with his sister about his blood work; his sister is an oncology nurse in Alaska who took on the role of being Johnson’s caregiver throughout his medical journey.

“She had a red flag shoot up because of one of the numbers, and she told me that I should press to have it looked at. I did. After several messages back and forth with the doctor’s office, the doctor asked if I would like to be worked up for fatty liver disease. I said yes, and my ‘adventure’ began,” Johnson said.

Johnson went to see the specialists on Feb. 14, 2018, and was scheduled to have an ultrasound and liver biopsy performed on Feb. 23, but he received a call on Feb. 20 to inform him he had low platelets, and they needed to change the method of performing the biopsy.

“The method, trans-jugular liver biopsy, had me freaking out quite a bit. I was losing pounds per day, not the way to lose weight even if you want to lose weight. I also had to go to the infusion center at the hospital to get a transfusion of platelets the next day,” Johnson said.

After telling his sister his platelet levels, she informed him that she would be flying down to Des Moines right away.

“She told me that with a platelet level that low, I could easily have bled out if I fell and hit my head badly. Well, that made me feel great, as I’m sure you can imagine,” Johnson said.

Johnson’s platelet level was around 36, and normal levels are between 150-450.

After the ultrasound and biopsy were performed, Johnson had a month to wait before hearing back on the results, so he scheduled a colonoscopy and EGD to be done in April. An EGD is a procedure where they run a camera down the patient’s esophagus into the patient’s stomach to look for issues.

On Mar. 30, Johnson was officially informed that he had non-alcoholic steatohepatitis (NASH) with cirrhosis, although he knew that was the case since the end of February. Roughly half of the cases of cirrhosis are related to alcohol use, but Johnson’s was not.

Moving forward, Johnson then had his colonoscopy and EGD procedure done.

“It was discovered that I had both esophageal and gastric varices. Everyone has veins in the esophagus and stomach, but in those who have NASH with Cirrhosis liver disease, they become engorged, and there is a risk of them rupturing and bleeding profusely,” Johnson said.

Johnson was referred to one of the two doctors in Iowa that were qualified to perform gastric gluing. He was scheduled to meet the doctor at the University of Iowa Hospital on Jul. 17, 2018.

“On Sunday, Jul. 15, 2018, I woke up not feeling well. I went to the bathroom and proceeded to have blood come from both ends. I called 911 and was taken to the ER in Des Moines. It was determined that I had to be life-flighted to Iowa City to see the doctor I was scheduled to meet in two days,” Johnson said.

Johnson’s esophageal varices had bled, and according to what his sister was told, he had lost roughly half of his blood volume.

It took a while for Johnson to be convinced that his liver disease was as severe because he never felt sick other than the bleeding issue. When he realized the severity of his condition, he decided to go through a transplant evaluation.

The transplant evaluation goes through a great list of tests and bloodwork, which led Johnson to find out that he has a genetic mutation that could have been a factor in developing liver disease. With a new liver, the mutation would no longer exist.

The evaluation also revealed that Johnson had a spot in his liver called a venous shunt.

“Basically, a group of veins in my liver grew together and created this spot. I think it had to do with the fact that blood flow through my liver was restricted,” Johnson said.

After the evaluation was complete, it was determined he was “too healthy” to be placed on the transplant list.

“I transferred my liver treatment to Mayo Clinic after the evaluation because I was confident in them and liked how they operated. They truly are one of, if not the, best hospitals in the world,” Johnson said.

On Apr. 29, Johnson attended Simpson’s service awards, where he was recognized for his 20 years at the college, but the service ended with him becoming very fatigued. The next day, Johnson began bleeding out of both ends of his body once again and was taken by ambulance to the University of Iowa Hospital, where they had to glue his varices, ending in a seven-day stay.

“This time, it was the gastric varices that bled. Usually, when they bleed, you don’t have much time before you are riding the big escalator in the sky. Somehow, I was very lucky,” he said.

Johnson returned to Mayo Clinic for his liver care until Jan. 2021, when the doctors discovered a cancerous mass on his liver. Fortunately, the doctors said they caught it at an excellent time.

Because of this mass, Johnson had higher chances of potentially being put on a transplant list, so he decided to go through another transplant evaluation during the same week as his cancer mass ablation procedure, March 15-19.

“My sister once again flew down from Alaska to go through the evaluation with me. I’m lucky to have a sister that is willing to leave her family 3,000 miles away for some time and just as lucky to have a brother-in-law and nephew who are OK with it,” Johnson said.

Johnson was provisionally listed and required to make it six months without a recurrence of a tumor to be fully listed for a transplant.

The surgeon informed Johnson that there were a couple of concerns with the new liver, but they still believed it was the right one, and he only had an hour to decide if he wanted it. Johnson frantically tried getting ahold of his sister.

“For what I swear was five minutes, all she could say was ‘Oh, my God,’ after I finally got her to stop, she told me that she thought I should go for it as I was in the best shape that I would ever be in, and the recovery would be easier. I called the surgeon back and told him to move forward with what needed to be done. I wanted to accept the offer,” Johnson said.

Johnson then began throwing together a travel bag as he called his coworkers Lynne Jensen and Rita Watson. Jensen took care of responsibilities Johnson had for work, and Watson made sure everything was taken care of at his apartment as he booked it to Rochester, Minn.

“I have to say that of all of my coworkers, they have given me more in the last months than I can ever return. I communicated with a good number of friends on the way to Rochester and was hoarse by the time I pulled into the hospital,” Johnson said.

The tumor in Johnson’s liver that was ablated in March was completely wiped out, and there were no signs of cancer elsewhere. This finding placed Johnson in the low-risk category for developing cancer in his new liver.

“In my meeting with the surgeon, I asked why it was that I was able to get a transplant so quickly. It all was related to the fact that the donor had COVID. Some transplant programs/centers just outright refused it because he had the disease. Other patients turned it down if I understood him correctly,” Johnson said.

Despite other patients turning it down, Johnson said he was willing to take any risks to continue living his life.

“I have to take this gift and do what I can to make sure to live a good, long, and as healthy of a life as I can. Not only is it for me, but to honor the man and his family who were willing to do what they did and donate what could be used after his death. I can never thank him or repay his family and loved ones for the gift I have received. I can only try to move forward and do what good I can in this world,” Johnson said.

Johnson hopes that he can communicate with his donor’s family one day but understands if that isn’t possible.

“I know that I will never be able to repay the family for what they have given me. I hope that in time, I can have an open channel of communication with them,” Johnson said.

Johnson has been working at Simpson for 23 and a half years and will be returning even if it means that he will have to be highly cautious of surrounding illnesses and possible work from home most days.

“I miss my coworkers terribly and many of the faculty and students that I personally know. I can’t return soon enough,” Johnson said.

Johnson wanted to make sure he thanked those who helped him: his coworkers, his family, his donor and his friends.

“I must thank my friends who called, messaged me through Facebook or texted me while I was out. Know that your messages always brought a bit of light into my day,” Johnson said.

Johnson said he signs up for nearly every research study for liver disease possible.

“I would like not to see anyone else have to deal with it, but unfortunately, I know that is not possible. I would have gladly given up everything to keep another person from having this disease and going through what I have had to, and I know that I was extremely lucky,” Johnson said.

Johnson hopes that he can someday try to make a difference in the lives of people who are battling liver disease.

“I would love to get out in front of people who are at a point where a difference can be made in their lives if there is a chance that they have liver disease or some other disease that is adjacent. Please consider being an organ donor. When you’re done with your parts, someone else can possibly use them,” Johnson said.