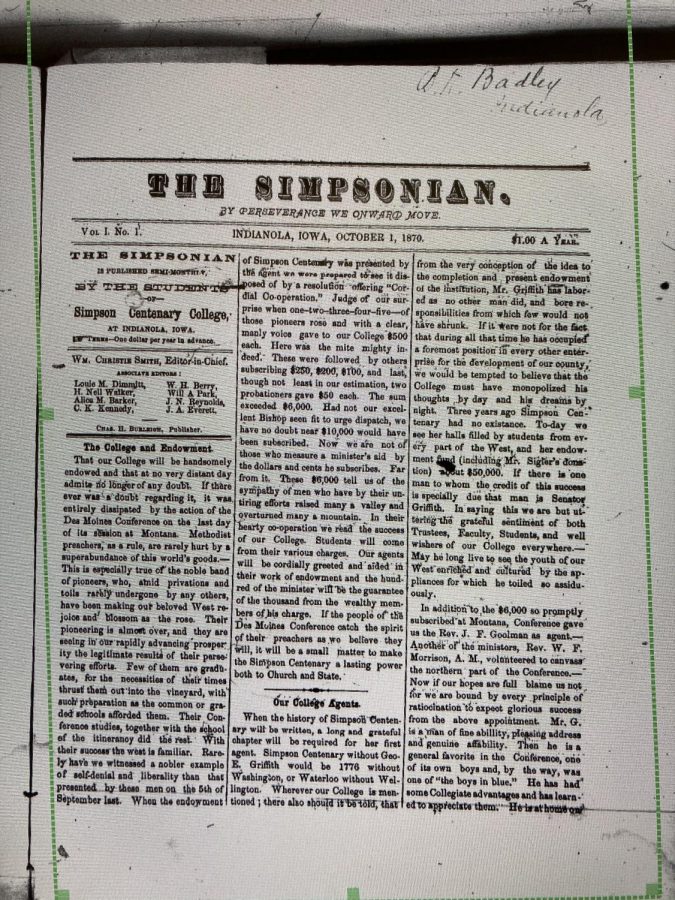 The first edition of The Simpsonian was published Oct. 1, 1870.

How could a college newspaper at a small liberal arts college west of the Mississippi actually claim the honor of “The Nation’s Oldest Continuously Published Student Newspaper”?

“Common sense dictates that only one college newspaper should be able to rightfully proclaim itself as the oldest in the country,” Reimold wrote in 2013.  “In reality, not so much.”

So who claims the title besides The Simpsonian? The Bowdoin Orient in Maine, The Cornell Daily Sun in New York, The Dartmouth at Dartmouth University in New Hampshire, The Harvard Crimson, The Miami Student in Ohio, The Transcript at Ohio Wesleyan University and the Yale Daily News.

Much of it is semantics. Maybe the paper changed its name. Maybe it didn’t always publish “continuously.” Maybe it wasn’t actually a newspaper early in its existence. The Dartmouth claims it was founded in 1799. Napoleon hadn’t even sold the Louisiana Purchase to the United States by then, and Iowa wasn’t admitted to the union until 1846.

The Simpsonian published its first issue on Oct. 1, 1870, and has been using the oldest student newspaper tagline in its masthead since at least the 1960s. (The tagline for the first issue was “By Perseverance, We Onward Move.”)

Revered Simpson history professor Joseph Walt wrote in his 1995 history of the college that alumni claimed it was the oldest. That claim, he wrote, was supported by recent student research. But in a story in The Simpsonian that year to commemorate the 125 birthday, Walt acknowledged even he had a hard time proving the claim.

“I have asserted that it is the oldest,” he told the paper, “but I won’t swear by it.”

As I tell each new Simpsonian staff, maybe we should insert the word “allegedly.”

Regardless, it’s still our birthday.